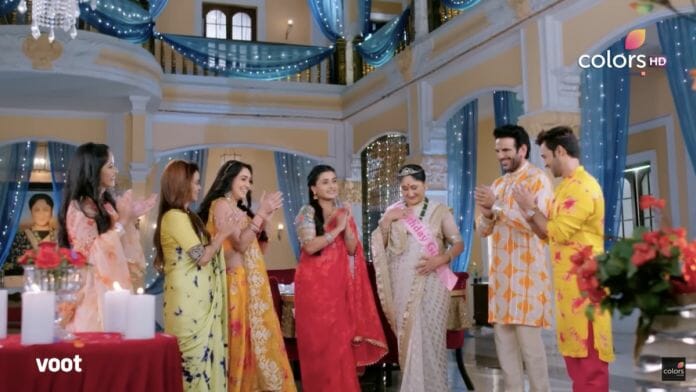 Colors TV’s popular show Sasural Simar Ka 2 is now gearing up for more drama as Dhami gets married to Aarav while Simar asks Vivaan to her the truth about Dhami. What will happen now? Will Aarav accept Dhami?

In the previous episode, we saw Vivaan tells that Dhami used to study with them in college. They come to know that she is a bit stubborn and would never give up on Aarav. He says that one day at night she came to their room and said that she wants to be with them because her roommates are troubling her. Then one day Aarav went out with his friends and Dhami got angry with him. Aarav was shocked to see this form of her and asked her to leave from there. So Dhami tried to kill herself. Then they came to know that Dhami has a disease of stubbornness. After this Simar goes to her room and tries to apply medicine on her hand. Aarav sees her and says that he cannot help her because of Dhami. He goes to Geetanjali and asks her to help Simar. Dhami sees all this and gets angry. Geetanjali helps Simar. Simar learns that Aarav has asked Geetanjali to help her.

Simar further sees that Dhami is going somewhere. Simar follows her. She is going out of the house after Dhami. Then someone drags Simar away from there. Dhami goes to Simar’s room and texts Aarav from Simar’s phone to meet her in the garden. Here Simar gets shocked seeing Samar. Samar grabs her and hugs her. Dhami takes their photo. Aarav also reaches there and gets shocked seeing Samar. He goes to her in anger. She takes Samar away from Simar. Dhami tells Aarav that Simar has a bad character. Aarav says that Simar is a pure soul. Further, he slaps Samar in anger. Aarav tells Samar that he should stay within his limits. Samar says that Simar had called him here. Aarav refuses to believe him. Simar tells Aarav how Samar kidnapped her.

In the upcoming episode, we will see that Simar will throw a birthday party for Geetanjali. Geetanjali will get happy. Later Yamini will arrive there. Geetanjali and others will stand shocked.

What will happen next? What will Dhami do now?