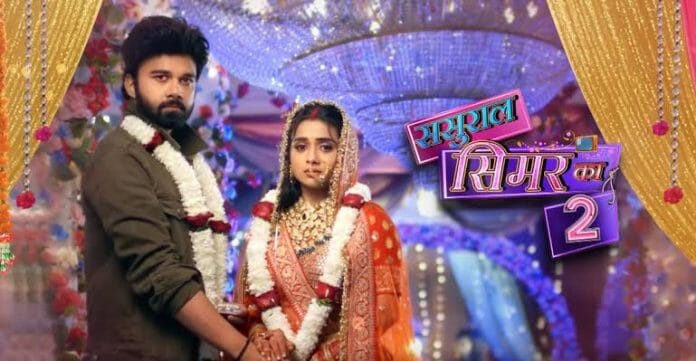 This week we saw Dhami tells Aarav that tomorrow she has called Media at home and their neighbours will also come, then everyone will come to know that she is Aarav’s wife. Geetanjali says to Simar that Dhami has done all this and she thought that maybe their relationship will break but she was wrong because their relationship can never end. She adds that today she came to know that music is an art and she sings very sweet songs. She adds that earlier she thought that Simar was like Yamini but today when she sees her and Yamini in front of each other, she comes to know that she is different from Yamini. She tells her that she wants to accept her with her music.

The reports come the next day. Vivaan asks all the servants of the house to turn on the camera of their phones. Here Reema goes to Dhami’s room and ties her hands. Here Simar gets ready for the muhdikhai ceremony. Vivaan asks Reema if she is feeling well. Reema says yes. After this Simar comes there. Aarav goes to her and removes her veil. Everyone gets happy seeing Simar. Aarav praises Simar that she is looking very beautiful. Aarav asks Simar where is Dhami and how did she handle her. Simar says that Reema has helped her in this. Here Dhami opens her hand. She gets angry. She says that she will not leave the Oswal family. Further Dhami comes out of her room. She is about to push Simar but Aarav saves her.

Simar tells Dhami that today is a very special day for her and Aarav so she should not do any tamasha today. She thanks Dhami as she has prepared the house very well. Dhami is about to answer Simar but Aarav interrupts her and takes Simar away. Further, Vivaan and the housekeepers make Dhami sit at a place. Vivaan tells Dhami to keep sitting here. Vivaan asks Maharaj ji to take care of Dhami. Later Geetanjali introduces Simar to everyone. Reema comes to Geetanjali and asks her to play music. Geetanjali refuses to do so. Reema says that they should do this to teach Dhami a lesson. Geetanjali agrees with her point. Geetanjali plays a song for Simar and Aarav.

Dhami says that this is her and Aarav’s song. Geetanjali tells Aarav and Simar that she wants to see them dance. Dhami says that Aarav cannot dance with anyone else on this song except her. She sees Simar and Aarav dancing with each other and gets infuriated. Later Dhami goes to her room and takes the knife. She says that only she can dance with Aarav. Gajendra tells Sandhya that she always wanted to dance with him, so does she want to take advantage of this opportunity today. Sandhya smiles. She dances with Gajendra. Geetanjali gets happy seeing her family happy. Dhami is coming towards them. Vivaan asks the servants to keep the camera on. Further Dhami comes there and stabs Simar with a knife.

Dhami says all this is a lie. She hasn’t done any such thing. Simar tells the inspector that he can investigate himself and find out the truth. Dhami says that they cannot do this to her. She says Simar will ruin them all. Aarav says that if she wants to prove Simar wrong then she should introduce them to her parents. Then Dhami’s parents come there. Simar and everyone else gets shocked seeing this. While Dhami gets happy. Dhami goes to them and hugs them. She asks them to come inside the house. Later Dhami introduces everyone to her parents. Geetanjali asks Aarav and Vivaan if they have ever seen Dhami’s parents. They refuse. Dhami asks her parents to show their ID cards. They do the same.

Dhami introduces her parents to Aarav. Aarav’s father gives omen to Aarav and says that he has heard a lot about him. Aarav refuses to accept the omen but Dhami’s father still gives him the omen. Dhami introduces her parents to Geetanjali. Here Anu hugs Sandhya and steals her ring too. She tells them that they are very simple people and lucky as Dhami is their daughter-in-law. Simar asks Dhami that her parents have come but where is Dr. Dhami’s father says that he may have gone out of country. Simar tells Dhami to clear her parents’ misunderstanding. Dhami adds that she had also called Dr Pankaj. Then Pankaj comes there. Dhami introduces Pankaj to the Inspector and the lawyer. Inspector tells Simar that she should not have wasted his time. Saying this he leaves from there.

Further Dhami takes her parents to the guest room. She asks him how did they delay in coming. They tell her that because it took them time to make a fake US passport. Dhami further explains to them that no one should know the story of her past life. They understand her point. She says that if they make a mistake, she will not leave them. Dhami adds that no one can snatch her love from her. Here Aarav comes to Simar. He sees that Simar is upset. He asks her what happened. Simar says that today he got embarrassed because of her. Aarav tells her not to worry. Simar further tells Aarav that she is confident that everything will be good in future. She adds that she had a great day today as she danced with him. Aarav smiles. Dhami sees them together and gets angry.

Gaurav says to Geetanjali that he will snatch her Aarav from her. Geetanjali gets angry and says how can he say such a thing. She adds that she won’t let go of her Aarav from her. Gaurav starts shouting. Dhami asks him to calm down as he can not talk in this way to Geetanjali. Geetanjali asks Simar to take care of Anu and Gaurav. Simar says fine. Geetanjali leaves from there. Dhami comes to Gaurav’s room. She starts scolding Gaurav and Anu. She says to them that if they repeat such a mistake then she will kill them.

Here, Aarav tells Simar that Dhami was studying with him. And she started coming to her room on and off. He adds that she used to lie to him a lot so her starts ignoring her. One day Dhami came to him and asked him why he is ignoring her. He told her to stay away from him as he doesn’t like her company. Then Dhami fainted. He took her to the hospital and her Dr asked him to take care of Dhami as a friend. But then Dhami made him sing the marriage certificate and also tried to kill Vivaan. Simar stands shocked.

Dhami calls someone and says that her work should be finished as soon as possible. She says that now she will teach a lesson to the entire Oswal family. Here Aarav tells Simar that Dhami is sitting silent and feels that she is about to do something big. Geetanjali invites everyone to perform aarti. Dhami comes there and tells Geetanjali that some more people are yet to come here. Just then Yamini and Samar come there. Simar and everyone else gets shocked seeing this. Geetanjali looks at Yamini angrily. Yamini and Samar are about to enter the house but Geetanjali stops them. Geetanjali tells Yamini that she cannot come inside his house.

Yamini says that she does not need her permission to come to this house as the one who called her is present here. Aarav asks her why she has come here. Samar says that today Simar had to finish a recording and since she refused to come to the studio, he has brought the entire studio here. Yamini says that Simar has signed the contract which she has to fulfill or else she will get caught in legal matters. Gajendra says that he wants to buy this contract from them. Samar says that someone has already bought this contract. Just then Dhami comes there and says that she has bought it and from now on Simar is her slave. Everyone is shocked to hear this. Geetanjali asks her how much she wants to break the contract. Dhami says that she can do anything to make Simar her slave. Aarav gets angry. He says what she wants. Dhami says that she had taken money from her father to buy this, then they should give 20 crore rupees to her. But later Geetanjali learns that there is no money in her bank.