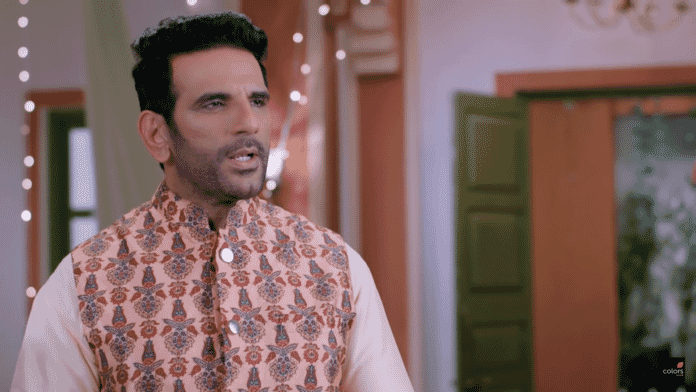 Colours TV newly launched show “Sasural Simar ka 2” has garnered a huge amount of audience from the date of its launch. The gripping storyline filled with twists and turns makes it engaging for the viewers. Will Oswal’s family accepts Simar as a new family member? It will be exciting to see how Simar wins over their heart.

In the previous episode we have seen that Gajender told Narayan family about Samar’s proposal and they were really happy with it, but Avinash asked Gajender that he wanted to talk with him inprivate. Gajender told to Avinash that he wanted Simar to be happy as he couldn’t help her when she left his house and everything happened infront of him but he was helpless at that time.

Indu told Avinash why he was thinking so much. Reema and Roma also tried to convinced Avinash as they told him that its difficult to live alone. Reema tried to tell Avinash something but he stopped her and told her not to interfere as last time Simar faced everything due to her only. Vivaan also stopped Reema and took her with him. At Oswal mansion Reema thanked Vivaan for stopping her, Vivaan was worried that who told Gajender to take such decision and how he know about Samar, then Reema changed the topic and told him everything happened for good and he should not revealed it to anyone.

Sandhya and Gajender also came home back, Sandhya told Gajender that Simar loved his son and his son was dieing everyday due to it, Gajender told that he knew everything and he know that his mother was not going to take back her decision and he cannot see his children suffering. This was the reason he wanted Aimar to settle down in her life, Sandhya also supported him.

Samar tried to convince Avinash that he would take care of Simar and give her all the dignity and respect which she deserved. Simar still didn’t know about the proposal, Avinash wanted to ask her view then only he would take any decision. Aarav watching Simar secretly.

In the upcoming episode we will see that Avinash tells to Simar that today Gajender came and asked her hand for Samar, Simar is shocked. While Aarav comes to Samar home.

Is Samar ready to marry Simar?
Will Simar accept Samar’s proposal?
Will Aarav fight with Samar?