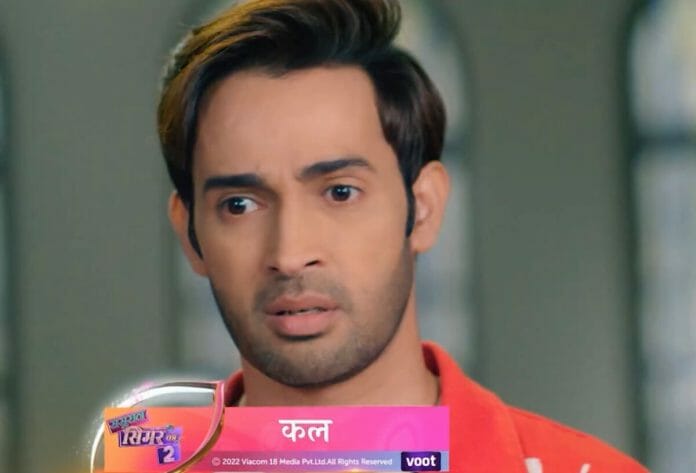 In the previous episode, we saw Simar turns off the lights of the house. Reema comes there as a ghost. Dhami gets scared seeing this. She tells Aarav that there is a ghost in this room. Aarav tells her not to be afraid. He goes out of the room. He further looks at Simar. He asks her if she is fine. She says yes. Aarav asks her what is she doing here alone. Simar says that she is not alone here as he is with her. Aarav tries to ignore Simar. Simar tells him that he should tell her the truth but Aarav refuses to talk to her. Simar asks him why is he doing all this. He says that he is doing all this to save her and his family. He tells her that Dhami is threatening him. He is about to tell her the whole truth but Dhami comes there.

Later Sandhya asks Simar if she talked to Aarav yesterday. Simar at the same time sees Dhami who is scattering pearls in the stairs. Geetanjali comes there. Simar is about to stop Geetanjali but Dhami already tells Geetanjali that pearls have fallen in the stairs. She tells Geetanjali that she is fulfilling all the duties of being a good daughter-in-law. Geetanjali gets annoy her. She scolds her and leaves from there. Aarav comes there and helps Simar. Dhami goes to Sandhya and wants to help her but Sandhya calls Simar and asks her to start the puja.

In the upcoming episode, we will see that Simar will go to Vivaan and will ask her if he also accepts Dhami as his daughter-in-law. Vivaan will refuse. Simar will ask Vivaan to tell her the truth.

What will happen next? What will Dhami do now?