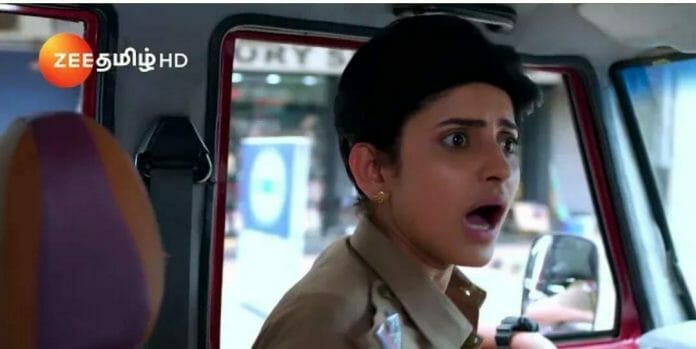 Zee Tamil popular hit show ‘Sathya’ ended and they launch season2 of it for audience demand. This story now focuses on Sathya is anxious!

In the previous episode we saw; Sathya stopped Anitha’s bike and demanded her to show her license. She lied to her that she forget it in home. Sathya asked her to bring it back leaving their bike near her. They were ready to pay fine.

Sathya demanded them to stand in road 1 hour holding the board they won’t drive without license. Anitha felt ashamed to stand there like that. Later Anitha met Gajendran and informed to him Sathya was their enemy so they wanted to join their hands with him to finish Sathya. He agreed to help them.

In the upcoming episode viewers will see; Anitha will place drugs in Sathya’s bike and alert the higher officers. Prabhu will ask Sathya to drop him in his office reasoning his car got repairs. Anitha will get shock to see it and try to stop them. Police will arrest Prabhu for smuggling drugs in bike. Sathya will get shock to learn the news.

What will happen next? Will Gajendran joins his hands with Anitha? When will Anitha get caught?