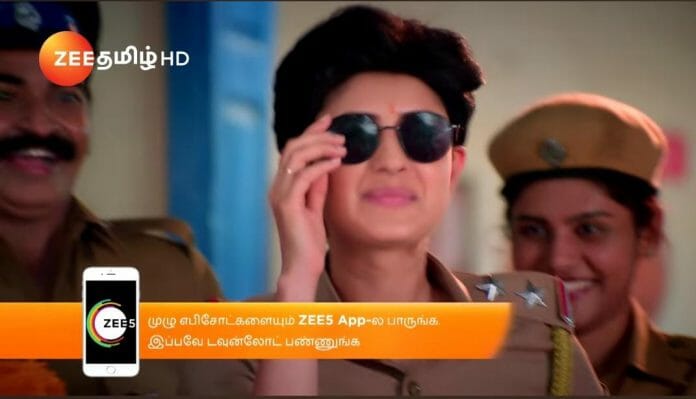 In the previous episode we saw; Sathya came to police station but stopped seeing Kumar beaten one innocent person. She enquired the problem to that old man. He informed to her that Kumar whom hit him in an intoxicated state but demanded him to give money to him. He added that Kumar snatched his monthly salary from him he was leading his family with that money only. Sathya took Kumar to police station without revealing her identity. She got shocked to find Kumar bribed the police staff and got respect from them. Sathya demand them to put FIR on him but they tried to cheated her. Sathya revealed her identity to them giving shock to them. Sathya lashed out at them and returned the money to old man. Her slum area people celebrate Sathya’s victory.

In the upcoming episode viewers will see; Sathya will dance with her slum area people. Sathya will strictly warn her station people that they might do service to people not to goons. She will warn them to stay in their limit. Sathya will get first case. She will get emotional seeing dog bitten one child. She will send the constable to arrest Vicky for allow dog to bite the kid. Vicky will use his servant to lie with them he is out of station. Sathya will rush to there to arrest him.

What will happen next? Will Sathya arrest Vicky? When will Sathya make her slum people proud?