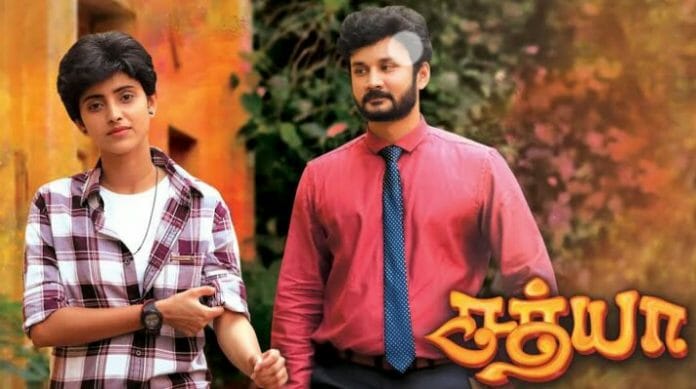 Today episode starts with Sathya informing to Kathir that she is sorry for this situation happening here she couldn’t prove his innocence in front of everyone that’s why she called him to justify himself.  Kathir stares her in guilty.

Sathya asks him to say in front of everyone there to say he treated Soumya as his sister he has no intention to love her.  They have mistaken him. His ambition is to become an IAS officer so he has no time to waste behind her.  Anitha mocks him that he can’t even dream of it.

Kathir stays there without words. Sathya again asks him to say it but he replies to her that they are saying the truth.  Sathya was taken back by his world. she stares him in a questioning way? He tells her that he loved Soumya that’s true but he has no intention to cheat her as they mentioned.

Sathya slaps him hard on his cheek. Everyone shocked seeing that scene there.  Sathya shouts on him is this not cheating? She says in anger he cheated her and that family for trusting him blindly.  She says to him he stabbed on her back.

Anitha mocks Sathya that she wished to black paint on us but her lovely brother humiliated her.  Sathya controls her emotions not to burst out there.  Kathir again repeats he didn’t cheat her.  Sathya starts to beat him while shouting on him and keeps mention him as a betrayer.

She shouts on him to get out of there but he stands there in guilty feeling. Sadashivam and his group enjoying that scene there where remain everyone feels pity for him. Soumya keeps crying seeing his state.  Sathya pushed him out of the house. He leaves from there tearing.

Sathya cries there Sadashivam again starts to taunt her.  Sathya apologized in front of everyone on behalf of him. Prabhu doesn’t like it all.  Sadashivam asks her to stay out of this marriage decision she nods to him. Even he asks her to stop Kathir from coming to this house.  She assures him that she will take care of it.

Sadashivam seems not trusting her thoroughly so ask her to promise him. Prabhu signals her negatively but Sathya promises to him that she will do nothing in her matter.  Soumya disappointed by her decision and close the door.  Sadashivam warns her if she pokes her head again in her marriage matter she will be out of this house.

Soumya throws the jewels down in anger and keeps trying to Kathir’s number while crying.  She blames herself for his state she blabbers to herself because of her he got humiliated in front of everyone.  Just then she notices her dad noticing her.

She got up in jerk. He snatched her phone from her and slap her hard.  Just then his wife,  Anitha, and her husband.  Sadashivam warns her to behave herself.  He scolds his wife for not checking her properly he blames her that it’s her mistake she is behaving like this.

He tells to them if it continuous problem will create so he gonna perform her marriage next week itself. Soumya got shocked.  He ask his wife to keep an eye on Soumya,  she is not allowed to go out and use the phone if she does anything then he will his wife,  and kick out slum girl Sathya from this house.  Anitha advises Soumya in a threatening tone her only hope Sathya also stayed away from her matter so its better to marry Vetrivelu without creating any problem.  Soumya starts to cry helplessly.

Sathya disappointed for what happened today,  Prabhu comes there and sees Sathya in a dull mood he ask to her why didn’t she take food.  Sathya tells him to believe her that she canceled this engagement because Vetrivelu is a spoiled brat and womanizer.

She has no idea about Kathir’s love matter like they mentioned.  Prabhu tells her that he knew her well before marriage itself.  If she knows the truth she knows to handle it genuinely,  he will never doubt Sathya honesty.  Sathya stares him emotionally.