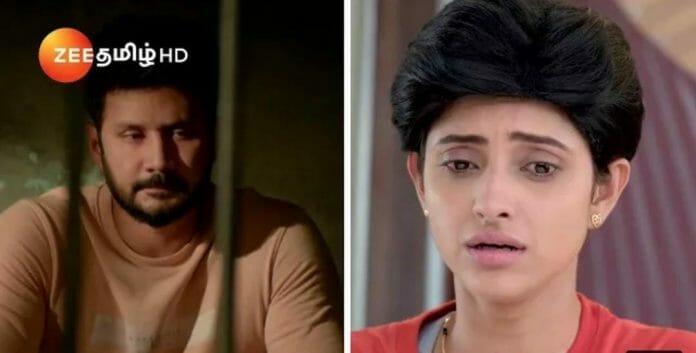 Zee Tamil most popular long running show Sathya 2 has an interesting story line. Now serial focusing on Sathya to join back in her work

In the previous episode we saw; Sathya was determined to win the physical training. She prayed god to make her win in the test for her Prabhu. Another side Prabhu worried for Sathya. He wished to see Sathya win in the physical test and become a police officer again. Sathya started her test. She created record in long jumping.

Judges appreciated her record. Gajendran’s henchman was not happy with her results. He wished to divert her to stop her. He revealed to Sathya that she attacked Kannayiram. He was fighting for his life in hospital.

Sathya said to him that she wasn’t reason behind his state. He revealed to him that Prabhu was in jail because of her. He took blame for her. Trainer motivated her to give her best.

In the upcoming episode viewers will see; Sathya will faint in ground. She will learn from doctor that she is expecting a child. Sathya will attend the test and join back in her work.

Sathya will bring Kannayiram on court and reveal to her that he police arrested Prabhu for murdered him. Kannayiram share with her that Gajendran and Mohan sent Mani to kill him and put the blame on Sathya.

What will happen next? Will Sathya join back in her work ? How will Prabhu save Sathya from Gajendran?