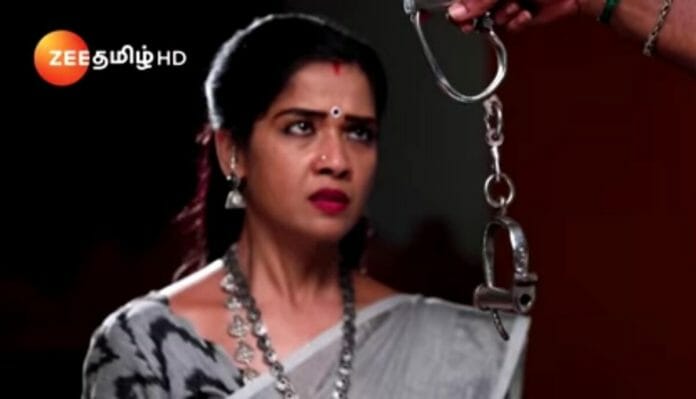 Sembaruthi is Zee Tamil hit show. This story is different with its unique story line. Now this show concentrating on Police to arrest Vanaja!

In the previous episode we saw; Kavitha shared to Raghav that his mom was not changed yet. She gave money to Kathir. Raghav assured her to solve this issue soon. Later Kanmani demanded Kathir to drop her in temple. She asked him to do pradharshan with her. She proposed to him but he refused to accept her. Meanwhile Adhi and Arun asked Parvathy to talk in Vanaja’s voice and sent it to all her contacts.

Editor replied to them. Adhi asked Arun to follow him and collect the details. Later Bhuvana got Kathir’s resign letter she advised him to continue his work. Later Adhi kidnapped the editor and demanded him to confess the truth. He called to Vanaja and informed him everything.

In the upcoming episode viewers will see; Vanaja will rush near editor. She will remind how did she killed Neelambari and put blame on Adhi. Later Vanaja will plan to Kill Editor. Adhi will stop her and bring police there. They will arrest Vanaja and take her from there.

What will happen next? Will Vanaja get bail? Will Akhila solve Bhuvana’s issues?