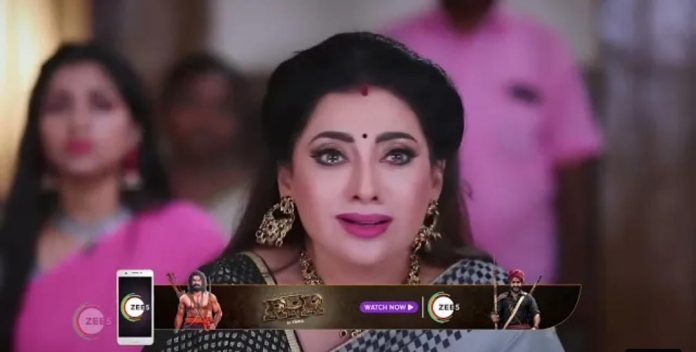 Sembaruthi is Zee Tamil hit show. This story is different with its unique story line. Now this show concentrating on Vanaja will meet Nandini in jail.

In the previous episode we saw; Vanaja threatens video editor for revealed truth to Adhi. He pleaded her to leave him but she didn’t heed to his plea. Adhi stopped her when she tried to harm that person. Arun said to her he intentionally didn’t took his phone from him then only he will contact her. They recorded all her confession here. Police arrested Vanaja and took her from there. In court Geetha submitted all the evidence against Vanaja. Police came there and informed to judge Vanaja is innocent real culprit surrendered in police station.

Nandini came there and took the blame surprising all. Vanaja doubted her intention. Editor Gave statement favour to Vanaja. Judge released Adhi and Vanaja. Later Vanaja pretended like innocent to Bhuvana she forgave her. Akhila and Bhuvana met in Temple.

In the upcoming episode viewers will see: Bhuvana will enquire Akhila about her family. She will assure her that are doing good. Later Vanaja will meet Nandini in jail and learn from her why did she saved her from punishment. Nandini will think she need Vanaja to take revenge on Akhila. Akhila will ask Kathir to study further. Later Adhi will apologize to Bhuvana thinking her as Akhila she will feel emotional reminding Raghav. Bhuvana fighting with goons video will make shares fall down in Adhi company.

What will happen next? Will Bhuvana solve this issue? How will Akhila change Raghav?