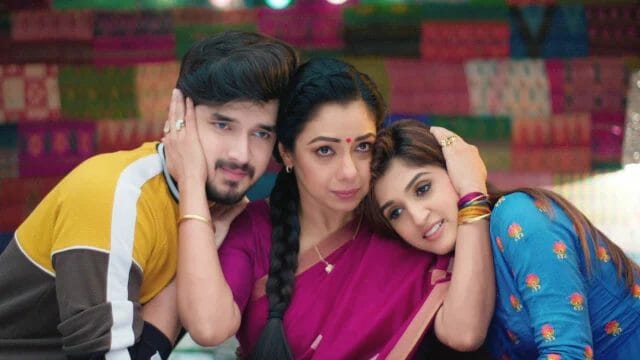 In the upcoming episode, Vanraj will spot Adhik with Pakhi. He will beat Adhik to the blue. Shah and Kapadia’s will learn the reason for Vanraj’s action. How Anupama and Anuj will handle the situation will be interesting to watch. Before that take a quick look to weekly highlight of the show

This week started with Anupama trying to confess Leela to invite kapadia’s in Kinjal’s baby shower. Hasmuk goes against Leela and invite Kapadia’s. Barkha yells at Ankush for accepting the invite. Sara and Ankush decide to visit Shah’s. Adhik thinks to fetch an opportunity to get closer to Pakhi. He advice Barkha to join him to the function. Shah’s prepare for Kinjal’s baby shower. Anupama worries what will happen when Leela, Barkha and Rakhi will come together under one roof. She decides to handle the situations before it gets worst.

Shah’s celebrate Kinjal’s baby shower. Vanraj and Kavya miss the function. Anuj and Anupama imitates Vanraj and Kavya so that they absence can be filled. Leela likes the idea. Later, Kinjal’s baby shower starts with sweet and salty moment between Rakhi, Leela and Barkha. Towards the end of the week, Rakhi fetches an opportunity to talk with Barkha. Barkha says to Rakhi that Kinjal is pretty. Rakhi says Anupama as well. She talks about Anupama owning Kapadia Empire. Rakhi says it is weird instead of Barkha, Anupama owning everything. Barkha says it doesn’t matter. Rakhi tells to Barkha about Shah family. She reveal to Barkha about Shah’s history. Barkha tries to avoid Rakhi. Rakhi tells to Barkha about Malvika and Vanraj’s issue too. She adds Anupama is Kapadia now thus she wanted to tell her everything about her past. Rakhi says Anuj is crazy in Anupama’s love. Barkha stands stunned. Anuj and Anupama share an eye-lock.

Barkha says every family has an issue. Rakhi says Anupama is smart as she wants Anuj, Vanraj, Kapdia’s and Shah’s too. Anupama comes and asks what is wrong what if she is trying to balance her relationship. She adds she is unaffected if anyone calls her selfish. Anupama says relationship is important for her and adds no family can break if everyone starts to value each other. Rakhi and Barkha stand stunned. Anupama gathers everyone to start the function.

Samar explains the game. Shah and Kapadia’s enjoy the game. Samar starts the game. According to the game Kinjal and Partiosh will round the wheel, whose number matches will deal with the upcoming situation related to baby. Game starts with at whom baby will pee the most. Dolly wins the first round. Rakhi gets a tag baby will cry mostly in her arms. Rakhi and Leela argue. Anupama handle the situation and says it means baby will crave for Rakhi’s arm thus he/she will cry. The game continues. Anupama wins the game that baby will love her the most. Kinjal says Rakhi is a good mother but being a business woman she didn’t gave her the love she craved for. She adds Anupama filled the gap. Kinjal calls her best and asks Anupama to become her upcoming baby ‘godmother’. She adds she wants her baby to have values like her.

Anupama makes Kinjal understand that Rakhi was away from her to make her future bright. She praises Rakhi for giving Kinjal good values. Rakhi and others get emotional. Rakhi think Anupama’s chessy talk turned her emotional. She adds Anupama can’t fool her. Barkha taunts Rakhi over Kinjal giving respect to Anupama. Rakhi asks Barkha to look at Sara too; she is also getting closer to Anupama. She asks Barkha to join hands with her. Barkha sides Rakhi. Anupama spots Barkha and Rakhi together. Anuj and Anupama gears up for a dance.

In the future episode we will get intense when Vanraj and Kavya will make a dramatic entry in the baby shower. Adhik will take Pakhi to the side. Vanraj will spot Adhik and Pakhi. He will beat Adhik. Anuj and others will learn about Adhik and Pakhi. What next will happen in the show will be interesting to watch,