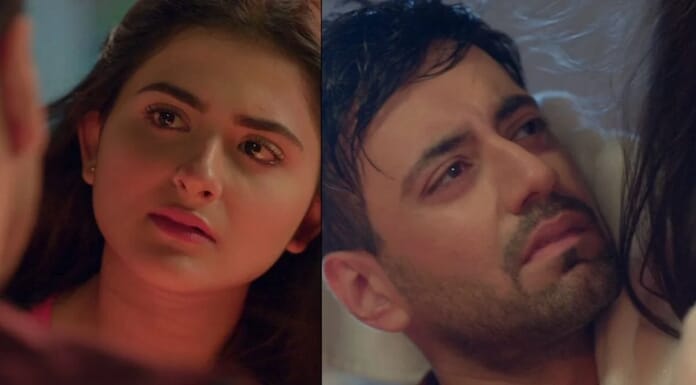 Scene begins in Bebo gets angry after learning her plan flopped. She dials to Manohar to find out what actually happened there? But his phone is switched off. She is hell angry on him for ruining her plan. She doubts where did Anokhi went? Kitty shares to her may that Manohar may killer her that’s why he is not attending the call. Bebo too shivers hearing it and says to her nothing will go wrong like this. Kitty adds that even Shaurya brother too didn’t reach to home. Mean while she notices Devi and college managements reaches to library and enquires to the librarian what happened how did it got broken? Shaan demands him to show the CCTV footage of that library. He informs to them that he checked it already but nothing registered in it after 5. They doubts what’s going on here? Shaan asks to him Is any books missing? He denies it. While discussion going on Devi notices the reaction in Bebo and Kitty face. She confronts them. Kitty blabbers everything to her in fear. Devi scolds them for planning everything in rush. She warns to them don’t take any decisions without discussing to her. She assures to her that she will kick Anokhi from house using Shagun soon. She advised them to don’t open this news to anyone out. They are unaware that someone recorded everything without their knowledge.

Shaurya and Anokhi returns to home with an awkward silent between them after their intimation. Shaurya stops the car infront of the house and hesitate to start a conversation with her. He has no idea whether he should apologise to her or open up his feelings towards her. Anokhi about to get out from the car he holds her hand. He closes his eyes and says to her that he didn’t touched her yesterday intentionally he has no option left then that to save her. Anokhi feels hurt to hears his apology to her. She was kept silent all through the journey because she is shy to face him. She couldn’t control her emotions here after. She asks to him what does that mean? Doesn’t he has no feelings on her while touching her? Is he just touched her to cure her? Don’t he love her? Before he could answer her she says to him there she loves him to the core. He touched her with her permission only then why did he behaving like this? She feels hurt and about to get down from car he stops her and gives a lip lock to her to express his feelings towards her. Shagun watches this from far and gets angry. She thinks that Shaurya leading an unhappy life with Anokhi hearing Devi’s word. She determines to separate Anokhi from Shaurya and get back her position in his life.

Shaurya and Anokhi enters into home and gets shock to see Shagun there. Shaurya gets angry and vent out his anger on her. He questions her whom let her inside his house? Devi comes there and informs to him that she done it. He lashes out at her too. Devi stops him and informs to him if he really has respect on her little then he light listens to her once. Shaurya says to her only once. Devi lies to him that few peoples enters inside the bride room and made Shagun unconscious there. Someone intentionally wrote letter in the name of her to ruin his image. Shaurya says to her that she won’t trust this. Devi swears on his name to make him believe it. He believes that she won’t swaer on his name unnecessarily. Shaurya questions her whom done that like? She informs to him that Aastha done it to ruin our family name. Shaurya can’t able to believe it all. Shagun plays an emotional drama there to get sympathy from him. Shaan supports Aastha there.