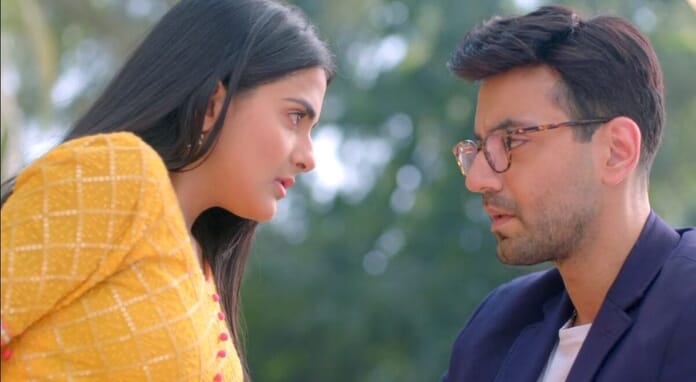 Scene begins in Shaan supports Aastha there. Shaurya dislikes the way his dad supporting Aastha whom betrayed him twice. He vent out his anger on his dad and leaves from there. Anokhi follows him behind. Devi smirks happily because she successfully breaks the bond between dad and son so the girl whom chose by his father will turn to be an unwanted one to his life soon. Anokhi consoles Shaurya and tries to convince but he is not ready to get convinced by her words when it comes about his mom. She fears to reveal the truth to him also.

One week passed Shagun tries to being close with Shaurya using her sympathy side to him but he genuinely ignores because he don’t have any interest on her at all. Only Anokhi is in his mind and heart. Anokhi feels happy to see his gentleman behavior towards Shagun. She is helpless to prove Astha’s innocence to him. She is standing like a doll in their family without taking any decisions. Devi makers sure that Shaurya and Shaan’s relationship getting worst day by day but she couldn’t do anything against Anokhi at all because she got his trust.

One day Devi visits temple and finds Astha there talking with Shaan and Anokhi. She gets doubt on that trio and takes their photo. She finds out the truth about Anokhi’s relationship with Astha. Devi gets a trump card to separate Shaurya and Anokhi forever. She shows the photo Shaurya and manipulates him against Anokhi. He refuses to believe it he rushes to his room and opens the letter to read which Anokhi given to him in first night. Which mentions that she fall for him in the first sight she met him. She added that Astha whom asked Shaan to let her to stay with them and took decision to gave Anokhi hand to him. Shaurya feels betrayed after learning his wife very close to his mom and she is his selection. Neither he can’t able to accept this truth nor hate her.

Shaurya confronts Anokhi about it she reveals all the truth to him. From that day he starts avoiding her. Anokhi feels heart broken. Shagun tries to take Anokhi’s place in his life but he vent out all his anger on her. Devi starts torturing Anokhi using this situation. Nearly two months passed there is no improvement in Shaurya and Anokhi’s relationship.

Shaurya unusually comes to home and finds Anokhi no where to seen in home. He didn’t search for her in anger but somewhere he feels uneasy like something wrong happened to her. He dials to her number but it’s not reachable. He enquires to college staffs and learns from them that she didn’t attend college today. He fears where did she went? He enquires to Devi about her but she gives irresponsible answer to him. Shagun badmouthes on Anokhi he slaps her in anger. He warns her to don’t dare to raise her tongue against his wife.

Someone claps there everyone attention turns towards door. They gets shock to see Astha there injured and Shaan supporting her to stand straight. Shaurya about to scold them but stop seeing Police there. Astha demands him to listen to her words only once. Shaurya didn’t speak anything there. Astha says to him that she heard she set up people to stop this marriage. She says to him they are half correct she stopped the marriage but didn’t used anyone to make Shagun unconscious. She shows one video to him which she taken in his marriage day where Shagun got excited to get admission in Oxford univerity and elope from mandap without thinking about him.

Shaurya gets shock to see it. Aastha says to him that she knew well about Shagun’s character. She agreed to marry him because of the family background. She wishes to use the family name but when she got good opportunity then that she left. He can may think why is she back now because she send an fake admission letter to her. Shaurya stares her in unbelievable look. Astha shows the ticket and CCTV footage to him. Shaurya glares Devi for lying to him even she sweared on him. Astha continues that Devi whom made her accident in order to don’t open about this matter to him. He denies it by saying she won’t go to that much extreme. Aastha says that no one mother will swear on their kids head unnecessarily even for a joke. But Devi did it just to separate him from Anokhi and crate a bad name to her. She shows the video to him where Bebo and Devi are discussing about the library matters. He feels broken hearing it all. Astha says to him that she didn’t left him in childhood but Devi whom forcefully taken him from her and didn’t let her meet him. She created bad image to her and made him go against her always. Shaurya stares Devi in disguist way. He informs to her that Anokhi is missing he fears something wrong happened to her.

Aastha says to him nothing to worry she is safe and congratulations to him for making her grandma. He stares her in confusion way. Shaan says he is going to be dad. Anokhi comes there blushing. He rushes towards her and hugs her in happiness. He thank her and mentions I love you to her. He holds Anokhi hand and another side his mom’s hand. He informs to them let’s start a new life staying away from all negativity.