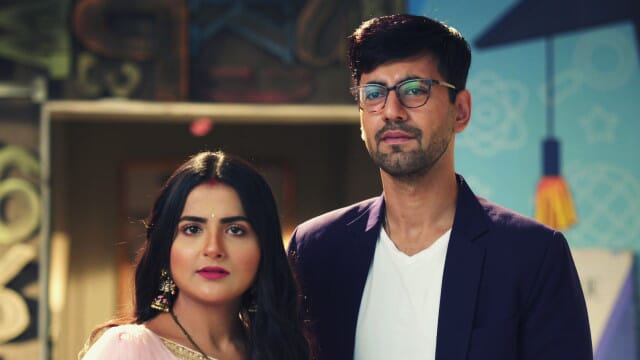 In the night. They both together cook chicken and having it, they go to sleep relieved and happy for getting back together. Pallavi places a kiss on her forehead before sleeping apologising. Anokhi slaps lightly on her cheek ahd asks her to sleep calling her stupid. Pallavi sleeps beside her and they both go into a peaceful sleep.

Shaurya is watching his son and daughter play. They both are very young but still they both fight with eachother over toys. He watches on as his daughter slapped his son on his face and snatched the toy from his hands which he is playing with. His son looks at him with tears and starts crying loudly. His daughter who is playing with her toy drops the toy and starts crying with him. Shaurya shakes his head at them ahd lifts both of them in his arms. He tries to calm them down but both are getting louder than eachother as if they are competing with eachother. His Mother In Law and Ahil comes there. They both try to take the kids from his hands but they both deny to leave their father. His Mother in law keeps pacifiers in their mouths which they throw away in anger. Ahil chuckles at this but seeing Shaurya’s glare he stops laughing. Shaurya asks them both to come with him and takes the babies with him to the terrace. His Mother in law comes there with pacifiers and Ahil with their baby watter bottles which they love the most. After lots of struggle the babies finally calm down seeing their uncle and Grandpa’s weird expressions. The babies break into laughter seeing their faces. Shaurya shakes his head looking at his father in law and his brother in law behave weird. This is common in their house. They both love his babies a lot. His Mother in law is the one who takes care of his children and that’s why he is able to focus on his profession otherwise it would have been very difficult for him to concentrate on his class without worrying about his babies.

In the beginning it was very hard for him to leave them and go to the college but eventually he got habituated to it. His babies are his life ahd like every loving father even he wants to spend time with them but like every father even he is busy in working hard to give his babies a beautiful life. Shaurya sits on the cradle that is on the terrace keeping his babies on his lap and starts cradling. His both the babies happily laugh at this.

Shaurya and the family members smile seeing them soo happy. Shaurya kisses on both of their heads closing his eyes while tears flowed from his eyes. Even grew up without his mother and rhe same is happening to his babies. He never got the love of a mother and his babies are destined to meet the same fate. Even they will never know the beauty of a Mother’s love. His Priya left them all alone to live their lives without Mother’s Love. Ahil and his in laws become sad seeing tears in his eyes. They knows what must be going in his mind. Even they are hurting for the loss of their daughter but then they can’t bring her back no matter what. They always supress their pain and the loneliness they feel without Priya as they don’t want Shaurya to become upset. They love Priya a lot but then they can’t show him how much they miss her because they can’t see tears in his eyes. His tears hurts them. He always had high hopes regarding life after he met Priya but now he lost his hopes and is only living for his children.