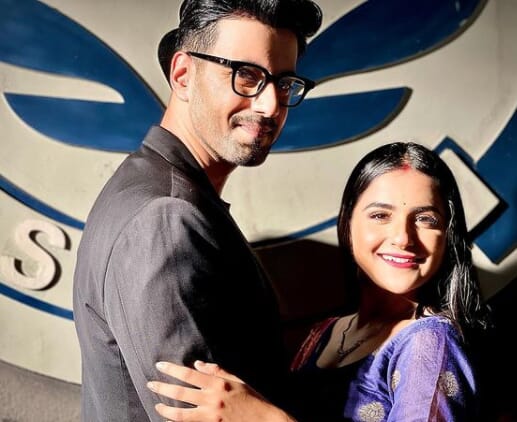 Anokhi looks at him and sheds tears. She has always loved him but she has never expected him to behave this way. She expected him to be lot of comforting and loving but instead he turned out to be one of the most cruel in her case. He has hated her for no reason. He has judged her in few minutes and has insulted her. He not for once thought how she would feel. Infact today also she didn’t see that concern or guilt in his eyes. All she felt was like he was apologising because he has no other way. He just apologised for the sake and she doesn’t want such apology. She wants to see the apology in his eyes instead of hearing it in words. Pallavi keeps her hand on her shoulder and asks her “Why are you shedding tears Anohki? Don’t tell me you got emotional hearing his words. Don’t tell me that you actually think that his apology was genuine” Anokhi shakes her head in no tears still flowing from her eyes and tells her “No. I didn’t find his apology genuine. I saw no guilt in his eyes. In fact it felt like he was just apologising for sake. It hurted me to know that he still didn’t feel guilty for hurting me” Pallavi tells her “At least now you got the reality check hopefully. Other wise you were all in to him thinking him be some Angel while in reality he just knows to hurt innocent people with his words ahd with his behaviour. This is why they say, Mountains look soft from a distance. But the truth is they are not. They are filled with all the rocks and animals that are harmful for human beings. Don’t trust looks Anokhi. There are many vicious beings hiding behind their beautiful looks” Anokhi nods her head and they both leave to the canteen.

After the classes are over, Anokhi and Pallavi wait for Ahil to come. Ahil comes on his car and getting down from his car. He greets both of them. Pallavi and Anokhi smile at him and sit in their places. Ahil drives the car while stealing glaces at Pallavi. Pallavi can feel his glances as well but she choses not to look at him supressing her smile. Anokhi on the other hand smiles looking at them. She likes Ahil for Pallavi. He is an amazing amd fun loving guy. He has always been good to them and never tried to make Pallavi uncomfortable with his behaviour. He also comes out as a very sensible person. He never behaves rudely with anyone and that’s what a woman would want from her future husband.

And she is sure that Pallavi likes him as well but then not showing it because she don’t want to trust anyone just in a short span of time. She wants to study them closely before she can trust them. And Anokhi likes her this character. Pallavi has always been conscious about what she picks and what she wants in her life. She has never fallen in the web of fantasies unlike her who has always been in a fantasy land. Pallavi knows what she wants from her life. She knows what she has to do to get what she wants. She is very intelligent and very sensible unlike her who gets jealous or loses her control when she gets angry. She has always admired Pallavi for her thought process and her way of handling things but then she never tried to be like her. She never tried to change her self into someone like Pallavi because just like her even she has a unique and interesting mindset. Atleast that’s what she believes. She knows Pallavi is testing his patience and his level of attraction or love towards her before she finally starts trusting him or giving him the attention he is craving for soo badly. She has always been pretty strong in her opinions unlike her whose opinion keeps changing from time to time. She is now trying to be more sensible and understanding without chaging her own character or losing her own self.