Episode starts with Preeto coming with aarti thal to welcome Saumya and Harman. She performs the welcoming ritual. Mahi gets jealous seeing them. Preeto asks Saumya is she fine? Saumya touches Preeto and Harak’s foot. Priest says the wedding muhurat is almost over, they should hurry up. Saumya asks Harman whose marriage? Mahi goes near Harman and tells him to tie the gathbandhan again. Harman looks at Saumya. Others get shocked too. Harman later replies that he can’t marry Mahi. Harak asks why is he doing this? Harman and Virat reveal that they did all the drama to catch Angel. Harman agreed to marry Mahi because of that only. Its a false drama to find Saumya and Heer. Harman adds he didn’t think things will get complicated like this. Mahi recalls Harman’s promise and remains adamant. She angrily tells Harman to go to mandap. She says she doesn’t want to hear anything but their marriage will happen today only. Harman gets shocked and says he already told he can’t marry her. Mahi forcibly takes Harman to the wedding venue. Other members follow them.

Mahi tells the priest to start chanting the wedding mantra. Virat says to Mahi that Harman already told her that it’s a drama. Mahi says she is not a toy, Harman can’t play with her feelings to get his job done, she has a heart too. Mahi says though this marriage doesn’t matter as they are already married but the mandap has been made for them so wedding will take place today. Harman is only hers. Harman stops priest from reading mantra. Mahi shouts at priest and tells him to read it again. Harman gets his hands released from Mahi. He says he already apologised to Mahi for his plan. She can even punish him but if its about giving rights then only Saumya has right over him not Mahi. He clearly declines Mahi’s demand saying he already cleared everything. Hearing Harman’s words Saumya leaves wedding venue. Harman goes behind her.

Saumya sits upset. Harman keeps his hand on her hand. He asks why she left the venue. Saumya says Harman shouldn’t have done this to Mahi. If Harman did this to her instead of Mahi she also would have reacted in same way. Mahi’s anger is justifiable. Saumya gets disappointed with Harman choosing wrong way to execute his plan. Harman says he did all these for the sake of Saumya and Heer. Saumya says she was scared of that only, she keeps thinking the same thing that what will happen to Mahi now after Harman’s return. Mahi is hurt and she can understand her pain as she is also woman from heart. Saumya says whatever maybe the reason the result will be bad, after Harman’s act things have become worse.

Mahi blames Preeto saying she should not console her now. She tells Preeto you always told me that Harman will accept me one day, you told me to dream of living a happy life with Harman but even after giving birth to a child he doesn’t want to accept me as his wife. Mahi says Harman’s family was always quiet and they did injustice to her. Mahi says she will snatch her own rights no matter what.

Harman says he will talk to Mahi regarding this. She will understand. Saumya says Mahi can go to any extent to get Harman. She won’t compromise. Mahi leaves the mandap and goes to her room. Virat tells Preeto that Mahi is already disturbed, she can harm herself, they need to go to check. Mahi looks at the kerosene bottle anxiously. 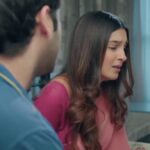