Colors TV show Shakti Astitva Ke Ehsaas Ki never fails to give important message to the audience through its unique storyline. Saumya is back again in the show. Currently Harman won Saumya’s trust after risking his life.

Saumya finally accepted that he is Harman ji. Now Angel has kidnapped Saumya and Heer. It would be interesting to watch how Harman and Virat will find them.

Earlier its seen how Virat got one idea to expose Angel’s informer. Harman and Virat engaged everyone in dance during Roka. Virat gave a solo performance.

Harman and Virat diverted their minds to gain the evidence against the informer. Virat got shocked to know Parmeet is the real culprit. He asked a straight forward question to Parmeet that where is Angel?

Parmeet did not accept her crime and she insulted Preeto. Harman showed the proof to Sant which shocked to everyone. Later Harman decided to reveal the truth to Mahi that he only agreed for the engagement to expose the informer.

Harman got to learn something shocking. He saw similar picture in Mahi’s phone gallery. Harman doubted that Mahi joined hands with Angel. He revealed it to Virat.

Virat lost his temper and tried to expose Mahi but Harman told him to be careful as Mahi can inform Angel about their planning and if Angel gets to know they caught Mahi she will harm Heer and Saumya. In the mean time Mahi came to Harman.

In upcoming episodes viewers will see Harman will slap Virat to stop him from revealing anything at heat of the moment. Later they will wonder why Angel is not trying to contact Mahi yet.

Other side Angel will reveal something shocking to Daljeet, she will recall how she framed Parmeet and Mahi both to fool Virat and Harman. She will also make a plan to kill Virat.

It will be shown how Angel is hiding in Harak’s house only. There Mahi will dance on her Sangeet function. Later Virat will bump into the disguised waiter sent by Angel. That waiter will drop his phone while Angel will be talking to him and Virat will grow suspicious.

Will Harman call off his wedding with Mahi? 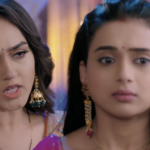