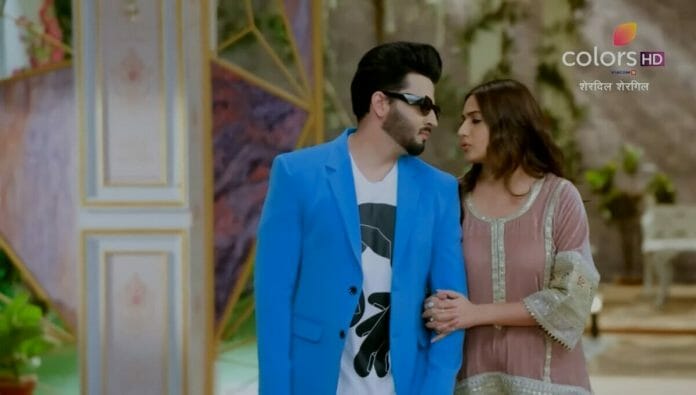 Colors TV’s popular show Sherdil Shergill highlights the story of two different personalities Raj Kumar Yadav who takes life as fun and Manmeet Shergill who is cautious and well balanced about everything in her life. Currently we are seeing that Manmeet gets accused. Later, she exposes Priyanka, Bhairav and Murari with the help of Raj. Raj decides to leave house with Manmeet and Anmol.

In the previous episode, Puneet, Ajeet come to meet Manmeet and her in laws. Priyanka takes a selfie with all. She delibarety steps on the oil and slips. Manmeet holds her. Nirali asks Manmeet if she dropped the ghee while pouring it in diya. Manmeet defends herself saying that she cleaned the floor everytime she poured ghee in diya. Later, Nirali asks Manmeet to take the responsibility of Priyanka’s medicines.

Manmeet agrees and gives Priyanka the medicine that she forgot to take. At dining table Priyanka feels uneasy. Later police comes home and interrogates Manmeet. They questions her for doing the gender test of the unborn baby and giving a 25000 rupees cheque for the same. Priyanka starts screaming. Doctor checks her and says that she has miscarriage.

She blames wrong medicines for the situation. She asks Manmeet to show the medicines. When Manmeet does that, doctor says that she never prescribed the medicines as those are harmful for babies.

Everyone blames Manmeet includes Nirali. Manmeet calls Raj. Raj comes there with a ward boy who exposes Priyanka saying that she was never pregnant. He also reveals that Murali gave him the cheque. Manmeet shows everyone that the cheque has Priyanka’s sign.

Raj reveals that Bhairav was with Priyanka in this plan. Nirali apologies to Manmeet. However Manmeet denies to launch police complain against Priyanka. Raj says that he will leave house with Manmeet and Anmol.

To know what happens next stay tuned to Sherdil Shergil on Colors TV/Voot app and this space.