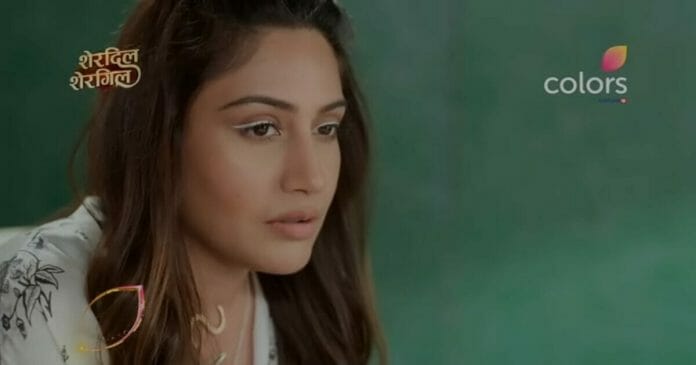 Colors TV show Sherdil Shergill is set for a new week with new drama and fun ahead. Raj is insisting of getting married meanwhile Manmeet has decided to avoid Raj as much as possible. However she is suggested by Hussain to attend Raj’s engagement.

In the previous episode Raj came to Manmeet’s house . Puneet comes there and greets Raj. They talked inside room and later Manmeet angrily said Raj never to meet her again. Puneet asked about Raj’s engagement. Manmeet strictly said that no one from them will be attending the engagement. Bhairav Singh, his men and Raj Kumar came to meet the goons who had bet Raj.

Bhairav Singh questioned the goon why he had beat Raj, he ended up lying that he had thought Raj is rich so he got greedy and attacked him. Flashback showed how Raj had met the goons and asked them not to reveal the truth to his father. Raj promised to give them 5 lakhs. and they should speak only what he has told them. Also it showed how Raj demaded Manmeet to give him 5 lakhs.

Later at office Hussain tried to convince Manmeet to attend Raj’s engagement to maintain professional relationship with Bhairav Singh. Manmeet thought of her moments with Raj and said Husain that she feels she should actually go to Raj’s engagement. In the upcoming episodes we will see what new drama unfolds in Raj’s engagement