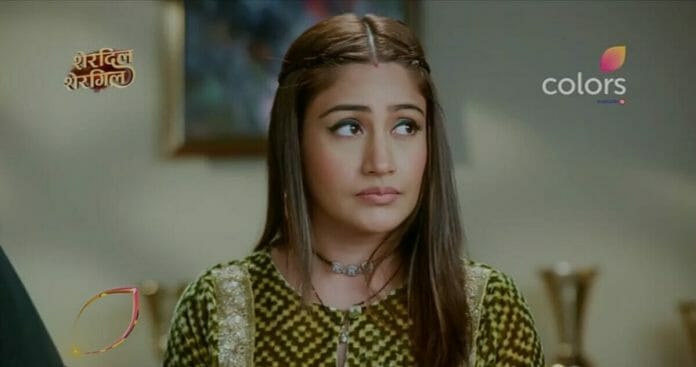 Colors TV show Sherdil Shergill revolving around protagonists Manmeet Shergill and Raj Kumar Yadav is now showing how Manmeet who has always been self dependent woman is now facing various hardships for being accepted as daughter in law. With all the manipulations around her will Manmeet be able to keep herself safe?

In The previous episode Manmeet and Priyanka went to the clinic. Priyanka told Manmeet they should click picture together and she will send to Raj Kumar as he always doubts her. Doctor took Priyanka for USG while Manmeet talked to Raj on call. After they left Murari was shown hidden there, he paid the ward boy and told him if he remembers the name correctly. Wardboy agreed to take Manmeet Shergill’s name.

Murari told Manmeet there are some urgent cheques from office she needs to sign. Manmeet went to see it meanwhile Priyanka spilled oil on the floor completely. Manmeet found new name on the cheque and was hesitant to sign but Murari fooled her.

Manmeet signed the cheque. After she leaves Murari takes that cheque from peon. Priyanka tried to slip on the oil but Pankhuri saved her. Priyanka sat for the puja and Manmeet was shown coming towards the oil spilled area. Murari was about to stop her but Mr Yadav said to let it be. Manmeet was shown talking on call and walking unknowingly towards the oil spilled floor.

To know what’s happening next stay tuned to Sherdil Shergill at a new time slot of 9:30 PM now!