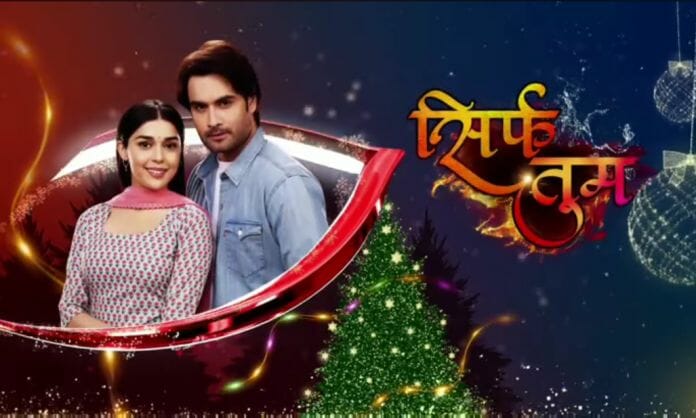 The episode starts with Ansh telling Suhani that she is trapped now and she can’t complaint about her husband to Ranveer now. Suhani hits Ansh’s head with a bottle. He gets injured and falls down. Suhani asks him to get up and he stabs her with a broken piece of the bottle. It turns out to be Ranveer’s dream and he gets up in shock. He rushes to Suhani’s room and Suhani counts. He breaks the door and gets in. He asks her if she is fine? She gets delighted and asks him he proved that he cares for her a lot, Ranveer takes Suhani outside and she says he gave her a reason to stay in the house. He showed how much he loves her and her trust on him won today. She asks him the reason why he cancelled the engagement again but he says his big problem is Suhani only. He tells her to not go to Ansh’s room again. He plays loud music to avoid her questions. She asks for how long he will keep hiding the truth from her. Why he can’t share his problem? She then requests him not to sacrifice his dream and career. She tells him to write his exam properly tomorrow..

During exam Ranveer doesn’t write anything but submits blank paper. Ansh smirks seeing that and thinks Suhani made Ranveer a weak student. Riya says Ranveer did right by leaving Suhani so he should stop thinking about her. Ranveer says Riya should not poke her nose in his matter as he is not going to marry her too. Riya throws water at Suhani’s face angrily and says why she is not leaving Ranveer alone when he chose not to marry her.

Riya says Ranveer submitted blank paper because of Suhani and how will he become doctor like that? she calls Suhani shameless who is staying in Ranveer’s house after all this. Suhani says Ranveer will become a doctor and she thanks Riya for informing her about what Ranveer did. She says Riya should be afraid if Ranveer learns how she behaved with Suhani then he won’t spare her. Suhani says she wont inform Ranveer but others can Riya should plead them not to do that.

Riya calls Vikrant and he assures her that Ranveer will not be close to Suhani again. He talks to Ansh and gifts him a car saying his wishes will get fulfilled like that if he listens to Vikrant like this. Ansh gets happy and Vikrant tells him to keep Suhani away from Ranveer. Ansh says their mentality is similar as he is his son. Vikrant warns Ansh not to call him dad. Suhani keeps books near Ranveer and asks him if he has matches or lighter. He says he doesn’t smoke then why she is asking. She says this books don’t mean anything to him and if he won’t study then she will also not study. He says why she wants to lose this great opportunity which someone gets rarely. She replies he is also wasting a golden chance to become a doctor. So if he is not serious about his career and won’t write his exams then she won’t attend exam too. He then studies with her and she gets happy.

Next day, Suhani tries to feed curd sugar to Ranveer but he avoids her saying they are together just for studies. He is helping her to become a doctor only but otherwise their love relationship is over. She says they can go to college together but he says he booked cab for her. She will not go with him. She asks him to drop her but he denies saying he will not listen to her everytime but will do the opposite. She smiles and says now she knows what she has to do as Ranveer gave her an idea.

Ansh says he will drop Suhani to college but she refuses to take his favour. He then calls a person and plans to get Ranveer arrested using his anger issues. Suhani overhears that and goes after Ranveer to stop him but he leaves. She gets inside the cab and reaches college. She looks for Ranveer and Riya stops her asking why she is behind Ranveer again. Can’t she see Ranveer is not interested. Suhani asks John and Raghu about him and then she sees him finally. Ranveer doesnt listen to her, Riya taunts Suhani again and the latter says she can’t believe Riya was her best friend. But it’s good she finally understood her priorities.