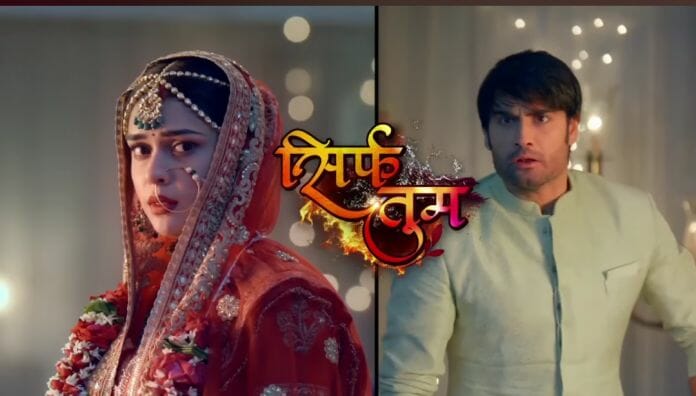 The episode starts with Ranveer barging into the house. Rakesh asks him how dare you entered my house. Ranveer says he won’t leave without talking to Suhani, Rakesh replies he also told him that he will never allow him to meet Suhani. Ranveer still goes forward and Ansh brings a stick. Ranveer asks Rakesh why he gave a shelter to Ansh who kidnapped Suhani and tried to kill her. Ansh says because he is son in law of this house and he has the right to stay here, Ranveer shouldn’t have thrown him out of Oberoi Mansion. He asks Ranveer to leave at once.

Rakesh warns Ranveer not to disobey him else he wont be polite towards him anymore. Ranveer moves forward and Rakesh starts beating him with the stick and Ranveer bears all the pain. Dadi stops Rakesh saying he is not immature then why he is behaving like one. Ansh tries to beat Ranveer but the latter stops him. Ranveer says Rakesh is older than him so he can beat him to vent out his anger but Ansh is a criminal and he should get beaten for that. Ranveer is about to beat him but Dadi stops him. Dadi tells Rakesh that Ranveer can never hurt Suhani, she believes that. They should allow him to talk to Suhani and he will leave after that.

Ranveer goes upstairs and sees Suhani is sitting in room silently. Ranveer says why she left the mansion without telling him. She can’t do this without any valid reason so what is that? He sees her suitcase and says he came here to go back to mansion with her only. He holds her hand and she refuses to go with him. He says he will handle Rakesh to which she says how many people he will convince as everyone will question their relationship. She says he didn’t give any name to their relationship then he has no right to take her back to his house. He is about to say that he loves her but then stops himself.

Suhani’s family comes there and Suhani asks him to accept her else she wont go with him. She shows him red chunri and vermilion. She asks him to fill her forehead with vermilion and make her wear the chunri. Then she will be ready to accompany him. She wants to know what is stopping him from accepting her, what is going on? He remains silent. Kamini says Ranveer can’t keep his own promise and he even sent goons behind Nikita for a small argument. Ranveer says he is not that kind of a person, he respects girls and Nikita is Suhani’s sister he can’t do this to her. Nikita says Ansh saved her. Ranveer asks Ansh angrily that he stooped so low, he even used Nikita to stay in Suhani’s house. Ranveer then threatens to burn his face with an iron and forces him to tell the truth to everyone. Ansh reveals that he sent goons behind Nikita not Ranveer.

Ranveer says now it’s clear who was lying. He says its strange how Suhani’s family believed Ansh despite knowing he kidnapped Suhani. Suhani says she knew beforehand Ranveer can’t do this to any girl. Ranveer drags Ansh to hall and says now that he is exposed, he won’t stay here. He tells Suhani to go back to Oberoi Mansion. Suhani replies it’s not about her family’s permission but it’s her decision that she won’t stay with Ranveer without getting married. He has to first marry her and give a name to their relationship. She says she will make the vermilion box empty and before that Ranveer has to fill her forehead with vermilion else she wont go with him. She makes the vermilion fall down and Ranveer does nothing.

Dadi asks Ranveer what kind of stubbornness is this? Why he is scared of commitment? Suhani says she will wait for him to make the revelation till then, she will not go with him. Ranveer throws Ansh out of the house and says that day will never come. She says that day will come within 24 hours. He will come to her and reveal everything why he doesn’t want to marry her. Ranveer leaves.