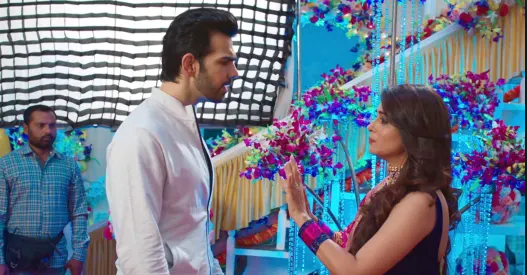 Next in Kahaan Hum Kahaan Tum drama will be high at the fashion contest finale.

So far in the episodes it is seen, Rohit to teach Sumit a lesson plays a prank on him. Sumit gets angry and thinks to avenge Sonakshi and Rohit both. Here, Sonakshi refuses Rohit’s offer to be her friend. Sona says what all happened with her mother she can’t forgive him and his family.

Later, Sonakshi shares exciting news with her family. She shows Pari’s photo which was published in the newspaper for the fashion show contest. Suman asks Pari to get ready for the contest. There, Pooja too gets ready to compete with Pari in the fashion contest.

Now in the upcoming sequence will see, Suman and Sonakshi will do huge argument which will stress Pari.

Sonakshi will get a surprising offer. Here, Suman will ask Sonakshi to perform in Pari’s function for 12 Lakh. Later, a dispute will arose between Suman and Sonakshi which will leave Pari in tears. And Pari too will yelll at Sonakshi for tyring to always be good in front of all. Pari will ask Sonakshi to stay away from her. Meanwhile, a desperate Rohit will make a mysterious phone call and will go to enquire about the number.

What next happens in Kahaan Hum Kahaan Tum will be interesting to watch. Keep watching the show mon-fri on Star Plus.

January 16, 2021
Anupama 16th January 2021 Written Update on TellyExpress.com Today’s episode starts with Nandini coming to Samar. She says he claimed he will teach how to...

January 16, 2021
Imlie 16th January 2021 Written Update on TellyExpress.com Episode begins with Aditya says those words in my mind and takes the name of Malini at...