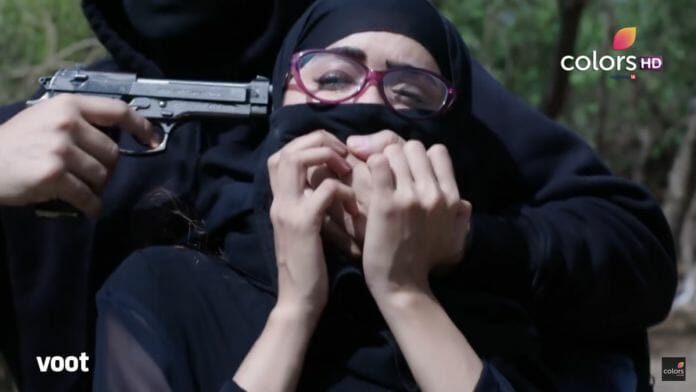 Colors TV show Spy Bahu is now on Yohan’s marriage track. Yohan is in love with his childhood friend Mahira but agrees to marry Alisha on his father’s request. Sejal finds out Yohan has connection with her brother Farid and thinks of a plan to meet him. Sejal leaves her sangeet and follows Farid in hope of finally meeting her brother. Will Sejal still get married to Jatin? Will Yohan marry Alisha?

Sejal got into the bus and told SK the bus number from her memory. Minal and Saras defended their daughter and told she must have a reason for leaving. Police surrounded the bus and asked Farid to surrender. Farid comes out with Sejal and gunpoint and threatened to kill her if anyone follows him.
Sejal tried to speak but Farid has her mouth closed and used her as a shield. Farid pushed Sejal and got inside a warehouse as the bomb goes off. SK rushed Sejal to the hospital. SK told Sejal that her DNA has matched and the terrorist who died in that blast was her brother Farid Mirza. Sejal’s family rushed to the hospital and brought her home. Sejal watched Yohan’s spy cam and listened to him talking on phone. Yoha told Farid was changing his mind but he finally did it and set example for many boys. Sejal recalled Yohan giving money to Farid and persuading him for the mission. Sejal decided she will take her revenge from Yohan and also keep her family safe. Shail and Shalini are glad that they finally got rid of Sejal and planned to take care of their next problem Yohan.