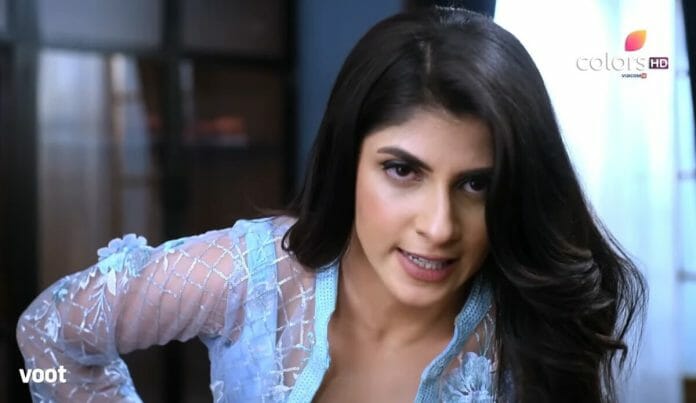 Colors TV show Spy Bahu is the story of a small town girl who takes on the mission of a spy to find evidence against a suspected terrorist. Sejal ends up marrying Yohan in order to get closer to him and find evidence against him. Yohan is determined to prove his marriage is a lie while Sejal tries to make her place in the Nanda mansion. Sejal lies to her family about her mission but will they find out her truth? Will Sejal find out the truth of her brother?

Sejal was reading the file of delegates when Alisha attacked Sejal from behind and tried to suffocate her with a plastic bag. Sejal struggled to break free as Alisha told she won’t let Sejal leave. Saras thought of all the insults Sejal did while walking on road and got hit by a truck. Sejal pretended to be unconscious and Alisha left thinking she would stay so till lunch. Alisha tried to impress the delegates and told they wouldn’t find such exotic menu even in any hotel. Alisha presented them with many foreign dishes. Sejal told she has prepared Samosas and Gulab jamun for everyone. Sejal told today the food has been prepared in ghee as guests are like God to us. Mr. Shah praised the food and told he hasn’t ate such tasty food in long time. Alisha told the food was lovely but it can be easily cooked but she has special gifts for everyone. Alisha told these are the rarest crystals found only in India and true Indian heritage and gave the showpieces to all the delegates. Sejal told but the gifts have Made in China written on all of them. Sejal told this is not Indian heritage but chinese product. Sejal gave them homemade hampers with ghee,honey and achaar. Mr. Shah praised Sejal and told he is impressed by her so they will finalise the deal. Mrs. Shah told Yohan he is lucky to find a wife like Sejal and told Alisha to learn to impress people from her. Sejal placed the audio devices in all the hampers successfully and waited for some update. Nurse called Sejal and told that Saras has met a very serious accident.