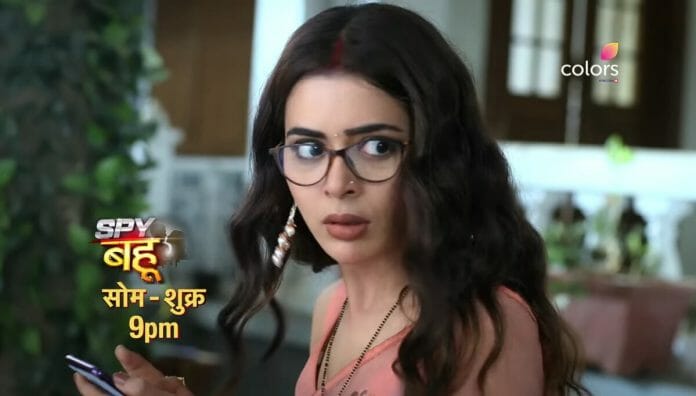 Colors TV show Spy Bahu is now getting popular as Sejal enters Nanda house as their daughter-in-law. Sejal married Yohan taking advantage of him being unconscious and is trying to make her place in the house. Sejal continues her mission as spy Bahu with hope to find evidence against Yohan. Meanwhile Farid disguised as Avishek has also entered Nanda house by marrying Drishti and is working on a plan of his own. Yohan wants to prove that he was forced into the marriage and is planning for the same. What will Sejal’s entry into Nanda house lead to? What secrets are going to come out?

Sejal told SK about the gunpowder and wire she found. SK told her a team is coming from Dubai and one of them is linked with terrorism but we don’t know who so you have to tap Yohan’s phone before they come. Sejal stole Yohan’s phone and tried to unlock his phone. Yohan and Sejal fight for the phone and it fell down. Sejal watched the picture in shock and yelled at Yohan. Yohan told Sejal he had to do it for Bamba and told her about the story of him meeting Bamba. Sejal thought one good act doesn’t change the fact that he killed Sohail and innocent people so she will definitely get him punished. Alisha planned some surprise for Yohan. Yohan told Arun he hasn’t forgotten his promise and gave Arun the file of delegates and told he invited them home for good relations. Yohan told Arun he doesn’t want any credit or money but just Arun to be nice with Drishti.

Arun told Yohan he is worried about him so he is harsh on him and hugs him. Alisha told Yohan not to worry she will handle Sejal well after all she is the unofficial bahu of Nanda house. Avishek told on phone that a member of their team is coming to Nanda mansion today and soon the sounds of their blasts will reach Kashmir. Sejal sat in auto and left while Saras followed her in another auto. SK gave Sejal a device and told she can listen to anyone using it and it is her mission to place it on the delegates coming to Nanda mansion. Sejal told Saras that she is happy and left.