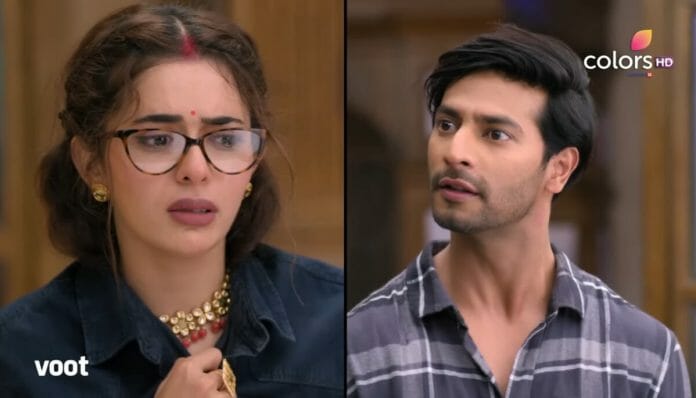 Colors TV show Spy Bahu is the story of a small town girl who takes on the mission of a spy to find evidence against a suspected terrorist. Sejal ends up marrying Yohan in order to get closer to him and find evidence against him. Yohan is determined to prove his marriage is a lie while Sejal tries to make her place in the Nanda mansion. Sejal lies to her family about her mission but will they find out her truth? Will Sejal find out the truth of her brother?

Yohan told everyone that Vyom tried to force himself on Sejal. Avishek arrested Vyom. Alisha tells Vyom not to worry she will call their father. Flashback showed Shalini making the plan with Alisha. Alisha told Shalini convinced us for this plan. Yohan told Shalini that he warned her that he would send them out of the house if they make a mistake. Yohan told now either he or Shalini will leave this house and told Arun to decide which would be more beneficial for this. Arun told Shalini she will have to leave Nanda mansion. Veera told Alisha your brother has already been arrested and now you should leave too. Drishti told Yohan she will bring medicine for Sejal as she needs rest most now. Avishek told today any girl could have been there in Sejal’s place even his own sister. Avishek thought his truth will hurt her a lot as he will always be Farid Mirza, Mahira’s brother. Sejal thanked Yohan and tells she knows he hates her and still what he did for her last night requires a very big heart. Yohan told hatred should never be bigger than humanity. Bamba informed Yohan that Minal is taking them back to Jamnagar.