Star Bharat prime time show Sufiyana Pyaar Mera is come down to a very interesting turn of the story. As we know that Saltanat and Kainaat are cousin sisters and look alike. On the other hand,  Zaroon who is the grandson of Miyajaan’s brother and belongs to the same family. The story is based on the journey of love from denial to acceptance. Though the storyline is kinda irritating the audience these days with an overdose of negativity. The makers in a way to highlight the love triangle are ignoring the base of the characters and as a result the essence of the show is fading.

As per the current story, Kainaat played a big game in calling off her wedding with Hamza. She with the help of her maasi has managed to manipulate the entire family members that she and Hamza are sharikh sibling. “Sarikh Dudh Sibiling” belives as per Islam that if a person makes another kid drink her maternal milk then they both becomes brother sister.

Such people can not get married to each other as per Quran. Later on it was revealed that all of these are nothing but a well planned plot by Kainaat and her khala. In the upcoming episodes of the show, viewers will get to see another ugly side of Kainaat.

Zainab will find Kainaat in a state of attempting suicide. She somehow manages to stop her from that and will promise to bring her happiness. Meanwhile, Zaroon will once again confront Saltanat about the reason for which she has decided not to confess about her love. Another side, Sabina will come to Mamoon and manipulates him in the name of being in good books of Miyajaan and also getting the authority of the throne of Dargah.

Saltanat and Zaroon will share a moment when Miyajaan called Zaroon and keeps a shocking demand in front of him. Well now let us see will Zaroon agree to Miyajaan pleads? 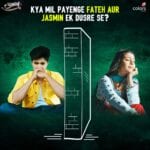