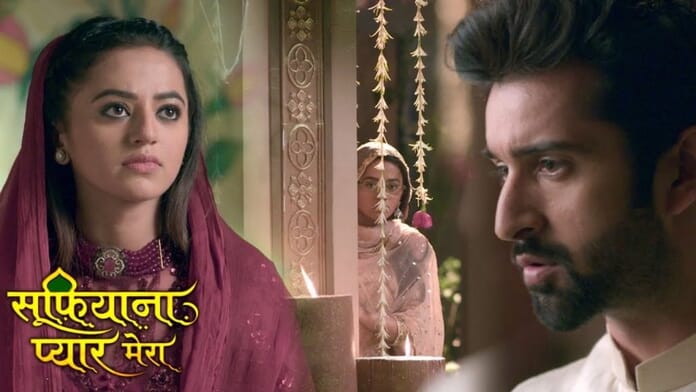 The upcoming episodes of Star Bharat’s Sufiyana Pyaar Mera are finally going to witness the love story of Zaroon and Saltant is started and they are out of the house now. In the upcoming days the story is going to take some interesting turns in the storyline.

The makers of the show are trying their best to keep the audience glued to their seats. In the upcoming episodes the life of Zaroon and Saltanat are going to be hectic and troublesome. Saltnat who entered the marriage hall at the end moment of Kainaat and Zaroon marriage is subjected to Miyajaan’s sore eyes. On the other hand, Dadi wants Zaroon to get out of the house so that she can make Hamza the heir of the wealth of the family and also of the gaddi of the Dargah.

Saltanat also decided to move out with Zaroon as she is in love with him and she doesn’t want him to face the consequences alone. The loyal audience of the show is going to witness the closeness and some light hearted moments between Zaroon and Saltanat. Whereas, Kainaat madness and crazy behaviour will go one level high after this incident.

Kainaat will be seen in the sherwani of groom and she will Qubool hai from Zaroon side for herself. She will also vows to destroy the happiness of Saltanat and Zaroon as she thinks Zaroon only belongs to her. Here Zaroon will make some efforts to keep Saltanat normal and happy. Rubina will ask Miyajaan to be polite while talking about Saltanat.

Later on, Zaroon will get shocked after realizing the Saltanat is not well and is not opening eyes. Unknown to all of these people an unknown person will always keep an eye on Zaroon and Saltanat to know about their whereabouts.

For more updates like this about your favourite show keep watching this space. Don’t forget to watch Sufiyana Pyaar Mera every Monday-Saturday at 10 pm only on Star Bharat.