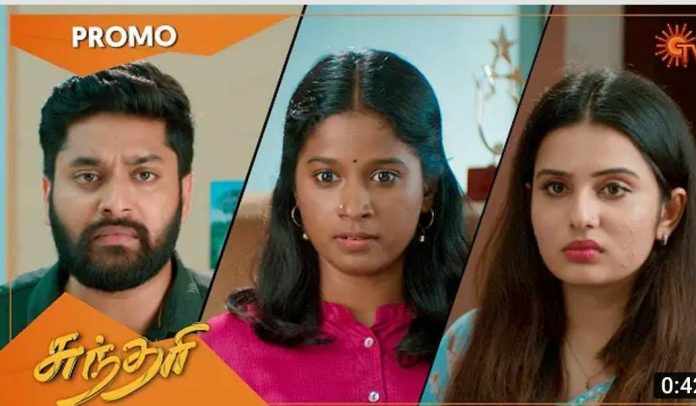 Sun tv fame Sundari serial never fails to entertain its audience since the first episode is now gearing up for further drama. Now serial concentrating on Sundari will challenge Karthick!

In Today’s episode we see; Karthick shares his happiness with Anu and reveals her that he got the tender. Anu noticed Sundari there and asks her to congratulates Karthick. Sundari shares to Anu that Karthick was CEO on that time but she coated that tender amount. Karthick asks her to stop taking the credits of his hardwork. Sundari asks him whom talking credit she coated that amount reasoning she felt that amount is high.

Subbu comes there with sweets but Karthick scolds him. Sundari asks Sokku to send the tender files to her. Mallika tells her that Sundari trying to prove herself to her with evidence. Chokku tells her that tender paper was missing there. Sundari shares to Anu that she wasn’t lying.

Karthick blames that Sundari taking advantage of her innocence. Sundari asks Anu doesn’t she know her from earlier will she lie to her? Sundari lies to her that she done mistake to stop Karthick from swear on unborn baby. Later she confessed everything to Mallika.

In the upcoming episode viewers will see; Anu will share to Mallika that she has no problems with Sundari continue her CEO post. Mallika will tell her that one servant can become head but a head shouldn’t become a servant.

Later Karthick will mock at Sundari. Sundari will tell him that he pushed her down from CEO post if he has dare push her down from collector post.

Will Sundari take revenge on Karthick?

When will Karthick get caught?