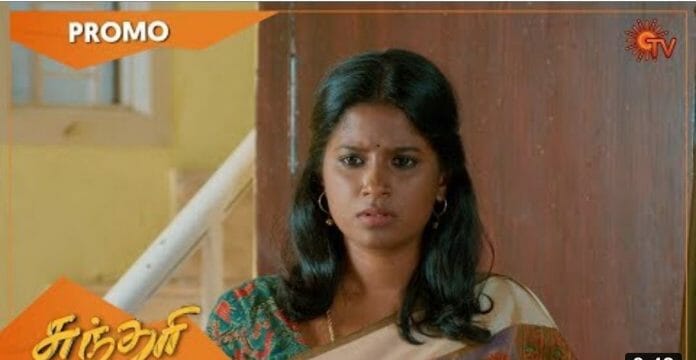 Sun tv fame Sundari serial never fails to entertain its audience since the first episode is now gearing up for further drama. Now serial concentrating on Sundari to doubt Arun!

In Today’s episode we see; Arun learns from his friends that they created rumours about him and Malini. They assures to him that people’s almost believed that Arun saved Malini from fire forgetting his anger on Murugan. Arun adds that he got more then enough. His friends asks him what’s his plan? Arun adds that he tried to trap Malini in chennai but she was escaped. This time he will take revenge on Murugan for his father’s death. Later Suguna demands Anu to eat the tables but she denies it. Karthick calls her and enquires her about her health.

She asks him when did he returning to home? He assures to her he will he back. Anu informs to him that she gave Sundari’s picture in matrimony advertisement. He gets shocked to hear it. Anu asks him Is he fall for her why did he getting shock? Karthick asks him Is Sundari know about it? She denies it reasoning Sundari will definitely accept this. Later Sundari finds out Karthick what gave advertisement in matrimony.

Karthick reveals to her Anu whom gave it. She asks him doesn’t he has shame to search groom for his wife? Karthick says that he is actually doing good job he can get free from his guilt by doing this. He is a perfect husband so she might appreciate him. Sundari raise her hand to slap him.

In the upcoming episode viewers will see; Valli will say to Mallika that Anu is like her daughter. She will ask Mallika to invite them for Anu’s baby shower function. Mallika will demand Subbu to return home along with Sundari. Arun will find Krishna and Malini together. Later Arun will meet Murugan which make Sundari smell something fishy.

What will happen next? Will Sundari find out the truth? When will Sidharth will get caught?