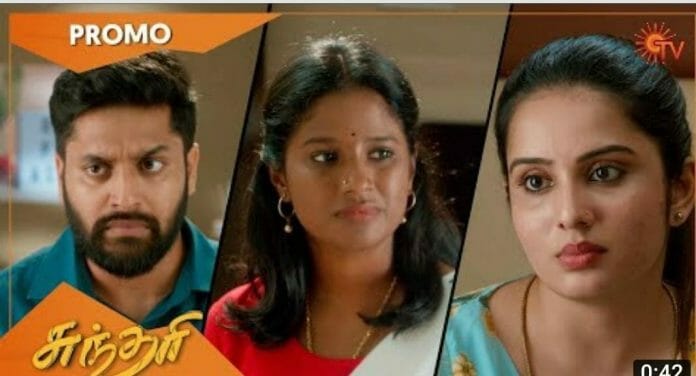 Sun tv fame Sundari serial never fails to entertain its audience since the first episode is now gearing up for further drama. Now serial concentrating on Sundari to open to with Karthick!

In Today’s episode we see; Sundari invited Karthick and Krishna to take food. Karthick denies it but Sundari mocks at him that his wife may waiting for him in home. Next day Sidharth meets Sundari in her house. She informs to him that she gonna confront the person whom gave advertisement. Sidharth denies it but she is adamant to enquire her in front of him. Later Karthick is checking Sundari’s picture Mallika asks him doesn’t he hate black skin people? Now he is staring her picture like this? Anu says that he was spellbound by her beauty. She is teasing him using her name.

Just then Sundari reaches there and confront her why did she gave advertisement without her permission? Anu says that she done this for her good future. Sundari tells her that she has no idea to do second marriage? Doesn’t her family thinking she is having a good marriage life if they see it all her efforts will be ruined. She don’t wanna get married again. Anu asks her Is her husband is still in her heart? If she say yes then she will take all effort to unite them. Sundari adds that he may threw her out of his life but she is not yet.

In the upcoming episode viewers will see; Sundari will say to Karthick that she thought he was ignoring her because of his love on Anu. Sundari will add that she learnt he hates her to the core that’s why he doing this all to her. Later Anu will console Sundari and assure her she will make her husband understand her value.

What will happen next? Will Anu find out the truth? When will Sundari become a collector?