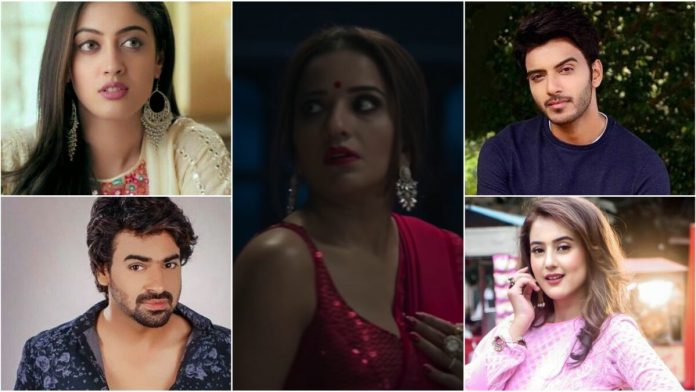 4 Lions Films ‘Nazar’ was a hit show on Star Plus. The first season of the show starred Monalisa, Harsh Rajput and Niyati Fatnani in the lead. Fans loved the acting of the trio. While, Harsh and Niyati as Piya and Ansh earned the separate fan base. Afterwards, show made a comeback with second season. Shruti Sharma replaced Niyati in the show. Harsh and Shruti rocked the show and second edition was hit too. Due to pandemic, show went off-air insipte of good TRP.

Now on popular demand Nazar is back with its third edition. The first look of show star ‘Monalisa’ who plays the character of ‘Dayan’ in the show is out. Fans are thrilled seeing the promo and are eagerly waiting for Nazar 3 to hit their screen. Producer Gul Khan bring the engaging content and exciting twists and turns. Nazar 3 surely will rule the TRP chart. Well, it will be exciting to see who will play the lead in the show along with Monalisa. Untill show makers unveil who will play the lead in ‘Nazar 3’, here we bring few suggestions. Tell us if you want to see these actors in the upcoming supernatural show.

Talented Vikram earned huge popularity post his stint in the show ‘Yehh Jadu Hai Jinn Ka’ by playing the character of Aman. He can once again hit the show with his acting skills. His features are just awesome and catchy for any supernatural character.

Aditya’s journey in ‘Namak Ishq Ka’ was praised by the audience. He nailed his character YUG. Ojha can try supernatural show and character, we are sure he will beat his previous role.

Actress work in ‘Pinjara Khubsurati Ka’ was commendable. Riya with her on-screen presence made the show watchable. If she gets an opportunity to play a supernatural character without any denial actress will shine out.

Tell us which actor you recommend to play lead in ‘Nazar 3’.