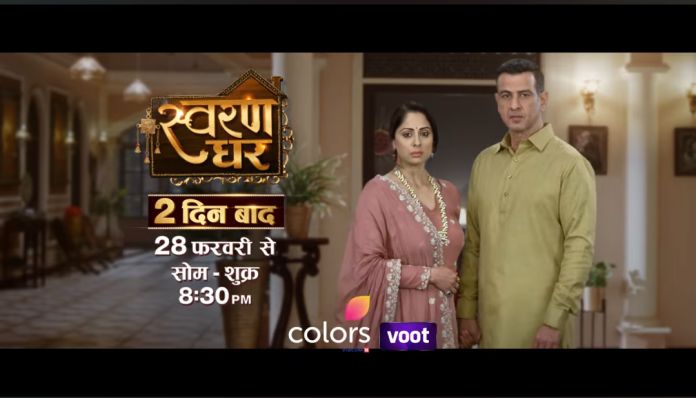 He goes to police and give them this information. Arjun listens to it and says that Rj Tanha will help them. Ajit goes to Swaran and informs about the same. RJ Tanha asks the owner of the chocolate brand to come over and meet him urgently on his show. Ajit tells Swaran that a kind hearted person helped them to circulate the message through Rj Tanha. Swaran prays to God for that kind hearted person i.e Arjun. Swaran and Ajit meet the owner of Mario chocolate but he fails to provide any useful information to them.

Kiran faints. Swaran goes to her. She wakes her up and promises to bring Aarav to her. Vikram takes Kiran and Nimmo to Swaran. Police decides to attach tracker at Swaran Ghar too. Kidnappers reach a isolated place with Aarav. Aarav’s chocolate falls on the ground. Later Aarav gains consciousness and recalls Swaran. She recalls how Swaran asked him to recite Satnaam Baheguru whenever he feels scared. He starts to recite it. The kidnappers hear it and plans to call for release money. They make the call which Swaran, Ajit, Arjun and police listen. They say that they have abducted Aarav by adding narcotic drug in the chocolate. They demands 1 crore rupees in exchange of Aarav’s release.

Sharvari meets Swaran. Swaran recalls and tells her exactly what happened. She recalls about two kidnappers and that one of them was having a mark on his neck. She also recalls that there was something attached on the tire that’s possible if the car came from any under construction area. Sharvari tells that there is construction work going on in Bhagat Das road. Nakul calls Swaran and asks her about the situation. Swaran tells Nakul to not worry as she won’t let anything happen to Aarav. At Swaran Ghar, Police inform Nimmo, Kiran and Vikram about the Kidnappers’ demand. Kiran asks Vikram to sell Swaran Ghar and arrange the money.

Vikram says that it’s not possible as they took loan by showing Swaran Ghar only. Kiran breaks into tears. Nakul calls and tells her that he will sell their USA house and return soon. Kiran says that they don’t have time as they don’t know how the kidnappers are treating Aarav. Ajit, Arjun and Sharvari get to know that construction work is going on in Johor Road too. They decide to split in two teams and search for Aarav. Arjun goes to Bhagat Das road and Ajit, Sharvari and Swaran leave for Johar road. Swaran thinks that she won’t spare the kidnappers. The episode ends.