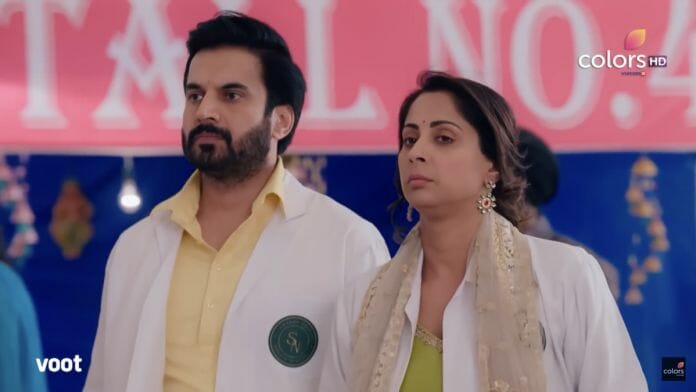 Swaran Ghar depicts the emotional turmoils and rollercoaster journey of an aged widow mother Swaran on Colors TV and voot app and currently we are seeing that Vikram gets emotional thinking about Swaran and Ajit’s secret marriage. Nimmo and Kiran reach Ginni’s school to expose Swaran’s truth and spoil Swaran-Ginni’s relationship.

In the previous episode, Divya returned home and enquired about Ajit. Ankita told Divya that Ajit is at dhaba for work. Divya insisted about going to the dhaba and meeting Ajit. Divya reached the dhaba with Jai. Divya innterogated Ajit’s employee regarding Ajit’s whereabouts. Jai signaled him to lie. The employee says that Ajit went to buy onions for dhaba. Vikram told Nimmo and Kiran that Mr. Sunny was an eyewitness of that incident. Vikram said that he always felt that Swaran and Kanwaljeet were made for each other. He said that he needs time to digest the truth of Swaran and Ajit. Kiran and Nimmo get to know that Swaran and daughters were going to put stall in Ginni’s school and Swaran was going as Ginni’s grandmother. Nimmo planned to spill the beans to spoil Swaran and Ginni’s relationship. Divya failed to find Ajit’s belongings in his room. Divya got furious and confronted Jai and Ankita. She asked them if there were some tension between them and her father, if Ajit left house etc. She called Ajit to get answers of her questions. Ajit’s phone kept ringing on the table. Ginni asked Ajit to accompany them. Swaran tried to object but Ajit convinced her. Swaran explained to the teacher about the product and their business. Ajit said that he runs dhaba. The teacher looked impressed. Swaran said that Mr. Bedi was very talented. The teacher nodded hinting at Ajit. Nimmo and Kiran reached Ginni’s school and saw Ginni’s registration form. Nimmo said that she would expose Swaran’s truth Infront of everyone.

In the upcoming episode, Swaran will slip on the floor. Ajit will prevent her from falling in front of everyone by catching her.

What will Nimmo and Kiran do? Will Swaran and Ginni win the competition? What will be Vikram’s next move? Will Divya get to know Ajit’s whereabouts?