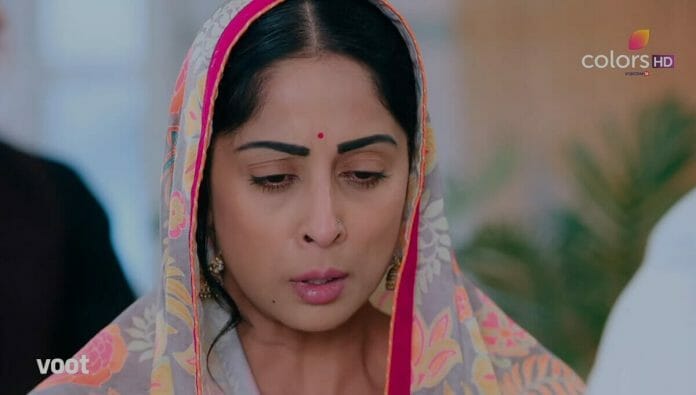 Swaran Ghar depicts the emotional turmoil and rollercoaster journey of an aged widow mother Swaran on ColorsTV and voot app. Currently we are seeing that Saroj manipulates Swaran to marry her son to save Nakul. Nakul’s condition detoriates. Swaran marries Balli for Nakul’s sake.

In the previous episode, Swaran prayed for Nakul. Nakul gained consciousness and learned about Ajit. Saroj asked Swaran to say yes to Balli for marriage and save Nakul. Nakul asked Swaran to not give up to their demands. Saroj kept reminding Swaran that Nakul didn’t have much time left in hand.

Doctor informed everyone that Ajit’s operation was successful and he was absolutely fine and within next seven days even liver transplant could be done. Bebe asked Swaran to get married to Ajit by signing papers before the marriage register. Balli, Saroj got annoyed.

Nakul tried to get up from his wheelchair and go towards Ajit but he fell unconscious. Doctor immediately took him in emergency. Later, it was shown that Swaran and Balli got married.

Yug denied to accept him as his father. Balli talked about his and Swaran’s honeymoon infront of their children and made Swaran uncomfortable. Swaran thought that she had to cry her whole life.

In the upcoming episode, Swaran falls on Balli’s feet and begs him to go for the liver transplant surgery. Saroj says that no surgery will take place. Balli says that his plan of getting surgery done is cancelled. Swaran gets shocked.

What will happen to Nakul ? Who will donate him liver?