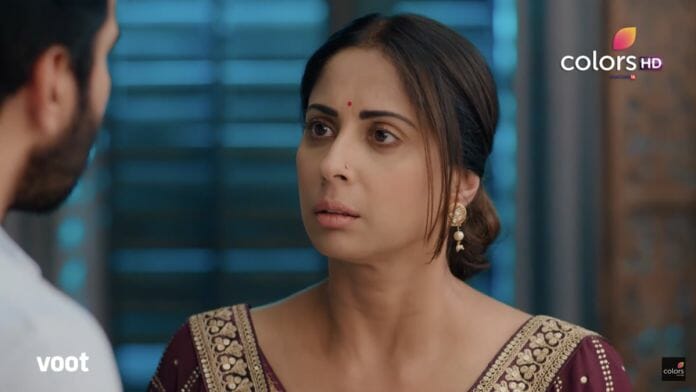 Swaran Ghar depicts the emotional turmoils and rollercoaster journey of an aged widow mother Swaran on Colors TV and voot app and currently we are seeing that Yug informs Swaran about Kiran and Nimmo’s conspiracy. Swaran requests Ajit to leave Swaran Ghar.

In the previous episode, Swaran told Mickey that Ajit didn’t have anything for Swaran in his heart. He would never cross the boundary. He knew the significance and conditions of friendship. That’s the reason why he stopped writing letters to Swaran after his wife’s demise. Swaran said that Ajit is a family man who has his son, daughter in law, grandson, daughter. She was upset with him but more than upset she wass worried for him. She didn’t want his happy family to be spoiled because of her so she keep asking Ajit to leave her house. Yug met Swaran. Yug congratulated Swaran for her victory and gave her pineapple pastry as treat. Nakul lashed out at Kiran for insulting their mother in front of everyone, for spiking Ajit’s drink and creating a scene at school. Yug informed Swaran that Nimmo and Kiran went to Ginni’s school and mixed alcohol in Ajit’s drink. Ajit tried to hide from Swaran. Ambar, Nehmat helped him. Later Ajit said sorry to Swaran. Swaran informed Ajit that Nimmo had spiked his drink. Swaran requested Ajit to return to his house.

In the upcoming episode, Swaran receives a 3000 bottle order. Swaran tells the girls that Ajit will assist them. Divya forces Ajit to swear that he will not return to Swaran Ghar.

What will Ajit do? Will Ajit come to help Swaran? What will be Nimmo and Kiran’s next move? Will Swaran get success in her new venture?