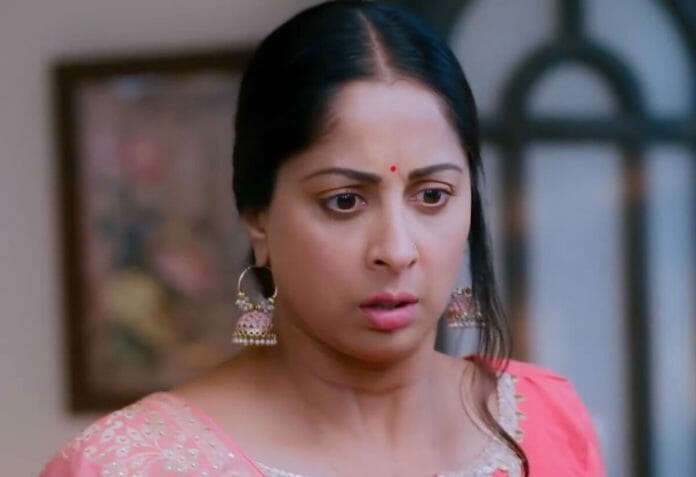 Swaran Ghar depicts the emotional turmoils and rollercoaster journey of an aged widow mother Swaran on Colors TV and voot app and currently we are seeing that Nimmo sneaks in Swaran Ghar, takes pictures of Ajit in undershirts. Nakul, Vikram and Yug question Swaran. Swaran shares her plan with Mickey.

In the previous episode Swaran asked Ajit to change clothes going inside the guest room. Ajit went to the guest room to iron his kurta. Nimmo sneaked in Swaran Ghar. She secretly took pictures of Ajit in banyan. She planned to defame Swaran and Ajit by publishing those pictures. Nimmo’s phone fell in mud and stopped working. Nimmo asked Kiran to get her phone fixed at any cost. Ajit’s son in law called Ajit but Swaran picked the call. Ajit family got to know that Ajit was at Swaran’s place.
Ajit called his son and told that he got stuck in work. Nakul, Vikram and Yug learned about Ajit’s night stay at Swaran Ghar from Nimmo. They went to Swaran Ghar and questioned Swaran regarding the same. Swaran said that her sons lost their right to question her the day when they brought murder charges of Kanwaljeet against her. They went to check the guest room but found the reporter girl there.

The girl told Swaran that Ajit asked her to take care of Swaran in exchange of money. Swaran got Mickey’s call who met with an accident later. Swaran shared her plan of starting working ladies hostel at Swaran Ghar with her. Swaran asked Mickey if she and Ginni would like to come over to Swaran Ghar.

In the upcoming episode Vikram will try to rip off the poster that Swaran drew for working ladies hostel. Ajit will stop Vikram. Vikram will give 2 days time to arrange 3 tenants or else they will come back to Swaran Ghar.

Will Swaran be able to find three tenants within two days? Will Vikram create problems for Swaran? Will Nimmo get her phone back ? Will Ajit be able to to help Swaran to find the tenants?