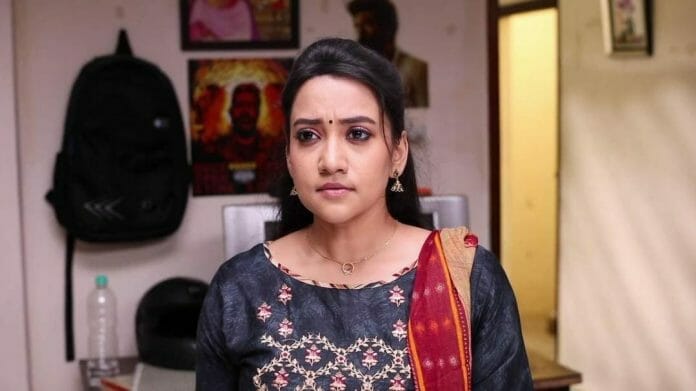 Vijay Television’s popular daily soap, Tamizhum Saraswathiyum, is gearing up for more drama with Ragini revealing to Tamizh that Chandrakala emotionally blackmailed her.

In today’s episode, it will be seen that Saraswathi’s father phones Kodhai and requests her to send Tamizh and Saraswathi to their house for their first Diwali’s celebration. Kodhai agrees.

Saraswathi is overjoyed to hear this. On the other hand, a heart broken Arjun is drowning his sorrow in alcohol. His friend is shocked to see find him in drunken condition. He makes a video call to Ragini and shows Arjun lying on the floor drunk and lamenting about Ragini breaking his heart.

Ragini is shocked to see this. Arjun’s friend lashes out at Ragini for choosing her family over Arjun after confessing her love to him. Ragini feels guilty and breaks down in tears. Saraswathi and Tamizh excitedly get ready to leave for Saraswathi’s parents’ house. However they are worried about Ragini and wonder what to do.

Saraswathi and Tamizh take leave from the family. Saraswathi gets happy tears when Kodhai and Natesan give the clothes they bought for Saraswathi parents. Ragini meets Arjun and tries to convince him to move on in his life forgetting her.

What Tamizh and Saraswathi do to sort out this problem?