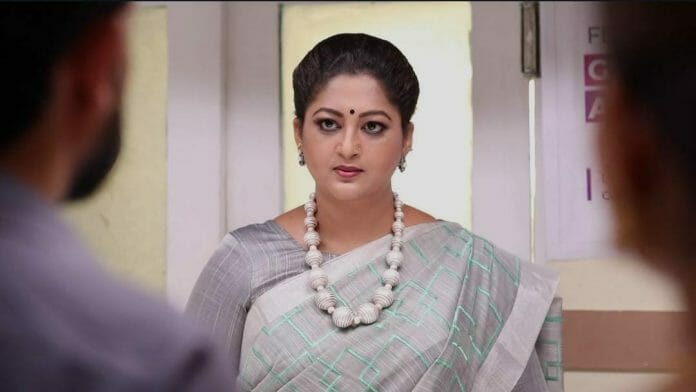 Vijay Television’s popular daily soap Tamizhum Saraswathiyum is gearing up for more drama with Saraswathi taking Vasundhara to the temple against Kodhai and Karthi’s order.

Previously, it was seen that Kodhai cared for Vasundhara and prohibited her from doing any household works. Saraswathi wanted to take Vasundhara to the temple to fulfill the prayers. But Karthik forbade Vasundhara from going out and reacted angrily at Saraswathi.

Chandrakala assured him to get him married to Ragini if he loves her. Adhi got happy to hear this. Later he confessed to himself that he loves Ragini. Tamizh felt guilty for ignoring Saraswathi and expressed it to Namatchi.

Saraswathi decided to fast for Vasundhara every week. She phoned Namatchi and told about the same. She also said that Abhi brought lunch for Tamizh as she wouldn’t. Later Vasundhara got touched to learn that Saraswathi was fasting for her. She decided to go to the temple with Saraswathi against Kodhai and Karthi’s decision.

Vasundhara lies that she’s at home. While speaking to Karthi, Vasundhara slips and falls. She becomes unconscious. Saraswathi immediately rushes Vasundhara to the hospital. Hearing Vasundhara’s scream, Karthi panics. He tells it to Tamizh.

The latter phones Saraswathi and learns about what happened. They rush to the hospital. Saraswathi gets blamed for Vasundhara’s conditions and has to
bear Karthi, Kodhai’s scolding.

Will Vasundhara and Saraswathi’s bonding change after this incident?