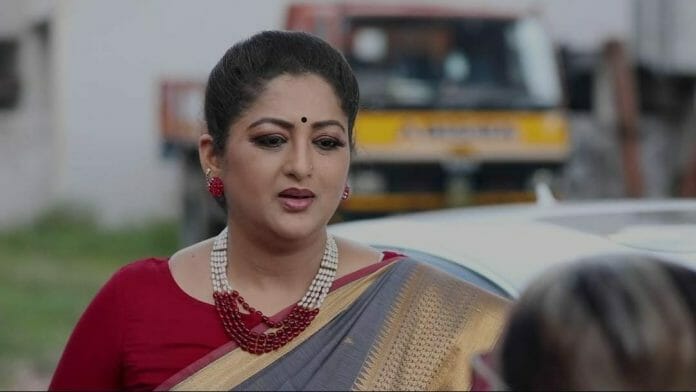 Vijay Television’s popular daily soap Tamizhum Saraswathiyum is gearing up for drama with Chandrakala taking photos of Tamizh at Madhu’s house and sending to Saraswathi’s grandmother.

Previously, it was seen that the goons troubled Madhu. The latter called Tamizh. But Tamizh didn’t answer the call as he had given his word to Saraswathi. However Tamizh called Namatchi and told him about Madhu calling him.

Namatchi advised Tamizh to not answer the call. Madhu recorded a video of the goons and shared to Tamizh. The latter panicked seeing the video. He shared the video with Namatchi as well. Tamizh and Namatchi came to Madhu’s house. The goons ran away seeing them.

Tamizh and Namatchi tried to pacify a scared Madhu. That time Saraswathi called Tamizh. Tamizh wanted to tell the truth, but Namatchi stopped Tamizh. So Tamizh lied to Saraswathi that he didn’t talk to Madhu and he is at his house now. Meanwhile Chandrakala clicked a photo of Tamizh bike standing in front of Madhu’s house.

The latter is shocked to see the photo. She immediately goes to meet Chandrakala lying to the family that she’s going to the temple. Meanwhile Ligam comes across Kodhai and Natesan.

Lingam thanks them for sending Saraswathi home and forgiving their conflict. Kodhai and Natesan deny this and says that Tamizh and Saraswathi lied to him. On the other hand Saraswathi’s grandmother meets Chandrakala. The latter instigates her against Tamizh.

What will happen next? Will Chandrakala get successful in her intention?