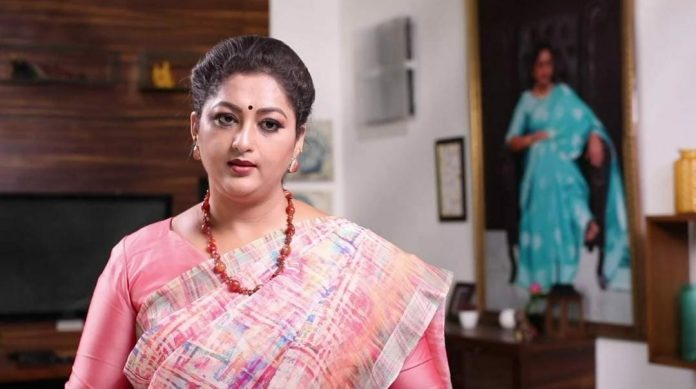 Vijay Television’s popular daily soap Tamizhum Saraswathiyum is all set for some interesting twists and turns in the story with Kodhai accepting Tamizh and Saraswathi.

Previously it was seen that Chandrakala felt humiliated by Saraswathi and fumed in anger. She expressed her anger and hatred for Saraswathi to Geetha, Tamizh’s aunt. She wanted desperately to take revenge from Saraswathi for her insult. She asked Geetha for a plan.

Geetha mentioned about Sarswathi not giving any good news even after six months of married life. Chandrakala asked Geetha to visit Kodhai and raise this topic. She asked Geetha to make it a big issue so that Saraswathi alone or with Tamish left the house.

They will decide to start their married life since Kodhai accepted her. Geetha will overhear when Tamizh will discuss about the same to Namatchi on the call.geetha will tell this to Chandrakala. The latter will decide to cause Tamizh accident to prevent Tamizh and Saraswathi to unite nad to throw Saraswathi out of kodai house.

Will Kodahi accept Saraswathi and Tamizh wholeheartedly? Will Chandrakala get succeed in her evil intention?