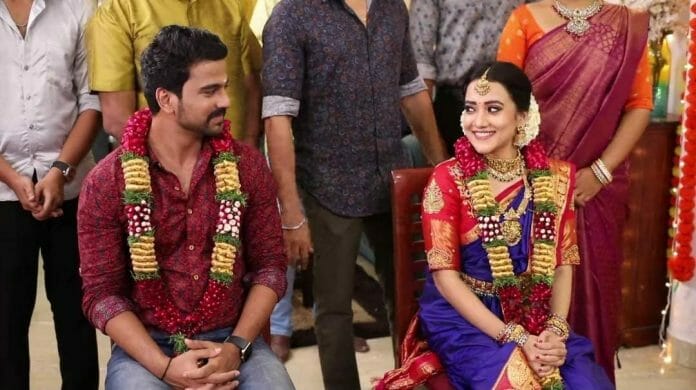 Previously, it was seen that Kodhai agreed for Arjun and Ragini’s marriage. She apologized to Chandrakala for not keeping her words. Chnadrakala pretended to accept Kodhai’s decision in front of everyone. Later, Chnadrakala and Adhi instigated Vasundhara against Arjun to try to stop Arjun and Ragini’s wedding.

Adhi told Vasundhara how Arjun had brainwashed him after Ragini had proposed him and had forced him to reject her proposal. On the other hand, Kodhai family discussed with their family’s astrologer to fix Arjun and Ragini’s engagement’s date.

Just then, Vasundhara came back home and said to the family that Arjun didn’t seem a genuine person. She told what Adhi had told her. Ragini shocked Vasundhara by revealing that Arjun had already told this to her. The family also supported Arjun which wasn’t liked by Vasundhara.

In today’s episode, it will be seen that Ragini and Arjun express their for each other over the phone. They decide to thank Tamizh and Saraswathi who had helped to unite them. That Saraswathi arrives there. Seeing Ragini talking with Arjun on the call, Saraswathi teases Ragini.

Later, Saraswathi tells about this to Vasundhara, but the latter walks away ignoring her talk which surprises Saraswathi. Chandrakala assures Adhi to stop Ragini and Arjun’s wedding by creating some problem. The next day, Arjun’s family arrives at Kothai’s house for Arjun and Ragini’s engagement. To everyone’s surprise,

Mallika and Adhi attend the function. Mallika questions Arjun’s mother about their background and their wealth and try to insult them. Later Ragini and Arjun get engaged while Vasundhara feels bad to see Chandrakala and Adhi’s upset face.

Will Vasundhara turn negative and will try to stop Ragini and Arjun’s wedding?

Is Arjun really pretending to be a nice person with an hidden motive?