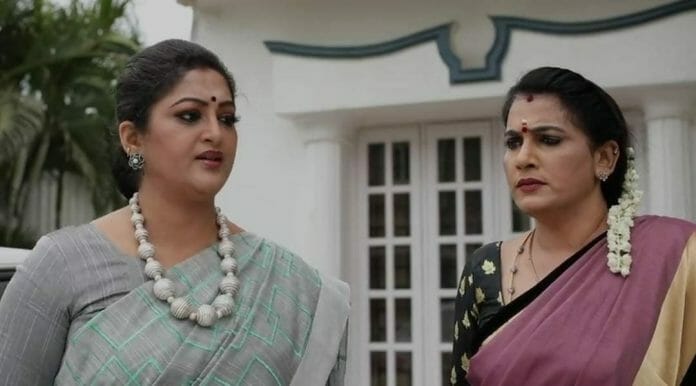 Previously, it was seen that Kodhai felt elated when the guests praised Saraswathi and Vasundhara’s sister like bonding. Chandrakala tried to boast about arranging party despite Kodhai’s refusal. Kodhai gave her an apt reply which engaged Chandrakala.

Later Geetha notified about Adhi becoming happy after talking to Ragini and advised Chandrakala to use this opportunity to make Ragini her daughter-in-law and to rule over Kodhai. At Kodhai’s house, Kodhai expressed that she felt blessed to have daughter-in-laws like Saraswathi and Vasundhra and praised their bonding.

Natesan praised Saraswathi and her care for her sister-in-law Vasundhara in front of Kodhai. The latter also agreed with Natesan. Meanwhile Saraswathi told Tamizh about Chandrakala pointing out that she didn’t become a mother yet and asking her to stay away from Vasundhara. She told that she also wishes to become a mother.

Tamizh felt guilty hearing this and pretended to sleep to avoid Saraswathi. The latter got upset finding Tamizh sleeping.

In today’s episode, it will be seen that Chandrakala instigates Madhu against Saraswathi by saying that she is responsible for her break up with her boyfriend and manipulates Madhu to take revenge on Saraswathi. Meanwhile Saraswathi confronts Tamizh about avoiding her. She says that she knew that he was pretending to sleep the last night.

Tamizh is unable to to tell her the truth. Later Chandrakala visited Kodhai and requests her to take Vasundhara to her house till her delivery. Kodhai and Saraswathi reject Chandrakala’s request which angers Chandrakala and the latter vows to throw Saraswathi out of the house very soon.