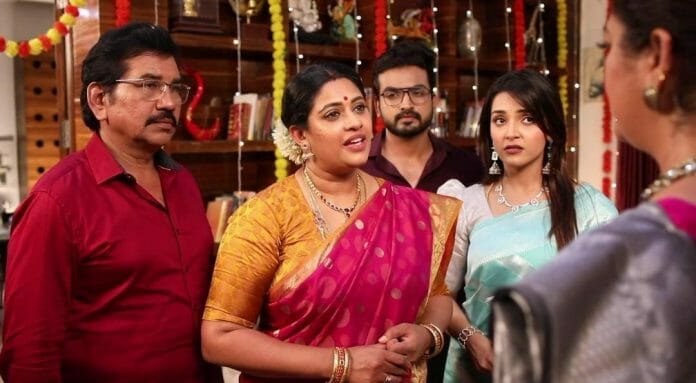 Vijay Television’s popular daily soap Tamizhum Saraswathiyum is gearing up for more drama with Chandrakala’s plan to humiliate Saraswathi backing fire on her.

Previously, it was seen that Kodhai and her family arrived at Chandrakala’s house. They were shocked to find many guests there. Natesan asked Chandrakala about the same to which Chandrakala said that she only invited her relatives of her closed circle. She added that she had also invited Kodhai’s relative.

Just then Geeta and her husband greeted Kodhai. The latter got angry that Chandrakala didn’t tell her about inviting her rekatives. However she decided to let it for Vasundhara’s sake. Chandrakala fumed in anger seeing Saraswathi taking care of vasundhara.

Chandrakala asked Saraswathi to stay away from Vasundhara since Saraswathi hadn’t become a mother yet. Vasundhara wished that Kodhai and Natesan should bless her first.

In today’s episode, it will be seen that Kodhai feels elated when the guests praises Saraswathi and Vasundhara’s sister like bonding. Chandrakala tries to boast about arranging party despite Kodhai’s refusal.

Kodhai gives her an apt reply which enrages Chandrakala. Later Geetha notifies about Adhi becoming happy after talking to Ragini and advises Chandrakala to use this opportunity to make Ragini her daughter-in-law and to rule over Kodhai.

At Kodhai’s house, Kodhai expresses that she feels blessed to have daughter-in-laws like Saraswathi and Vasundhra and praises their bonding. Natesan praises Saraswathi and her care for her sister-in-law Vasundhara in front of Kodhai.

The latter also agrees with Natesan. Meanwhile Saraswathi tells Tamizh about Chandrakala pointing out that she didn’t become a mother yet and asking her to stay away from Vasundhara. She tells that she also wishes to become a mother.

Tamizh feels guilty hearing this and pretends to sleep to avoid Saraswathi. The latter gets upset finding Tamizh sleeping.