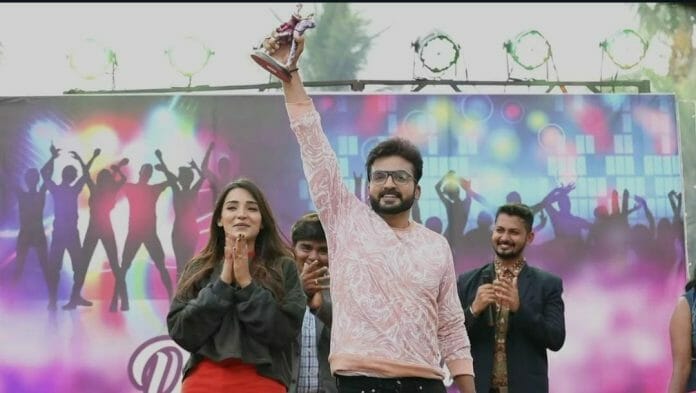 Vijay Television’s popular daily soap Tamizhum Saraswathiyum is gearing up for more drama with Vasundhara and Karthi getting into an heated argument.

Previously it was seen that Karthi rushed to the hospital. He apologized to an unconscious Vasundhara and expressed his love for her. Later Tamizh and Saraswthi revealed that it was all a drama shocking Karthi.

Karthi and Tamizh had a joyful moment, but Karthi got angry when Vasundhara said that they should thank Tamizh and Saraswthi for their efforts. Karthi fought again with Vasundhara and left the room shocking Vasundhara.

In today’s episode it will be seen that Saraswathi will get upset when Vasundhara will tell her that Karthi is still angry with Saraswathi and Tamizh and they fought over the same last night, so they didn’t start their married life.

Saraswathi will tell her that she’s doing wrong and will try to convince her. However Vasundhara will say that she fell in love with Karthi who respects and love his brother Tamizh and will get determined to start her married life with him till he becomes the old Karthi.

Later Saraswathi and Tamizh will feel bad seeing Karthi and Vasundhara not talking with each other and they wonder what to do to sort out their differences. Saraswathi, Tamizh and Vasundhara want to participate in an event. Karthi refuses. They all request him and he agrees without any intrest.

They will announce dance competition on traditional songs. Saraswathi-Tamizh and Karthi-Vasundhara take part in this. Karthi will win the competition.

Karthi will get elated receiving the winning trophy. However Karthi will get into a fight with Vasundhara when the latter will say that Tamizh gave him tough fight in the competition.

What will happen next? Will Karthi have a change of heart?