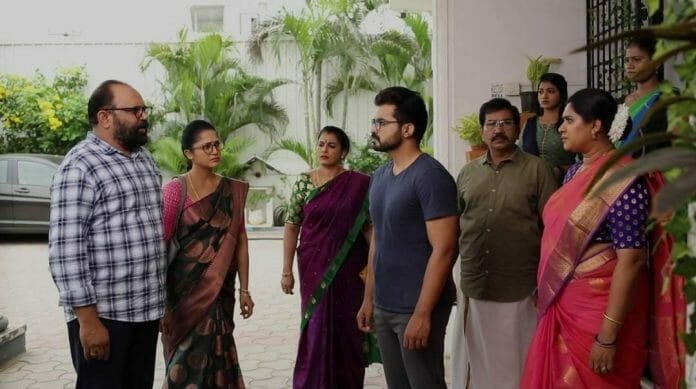 Vijay Television’s popular daily soap Tamizhum Saraswathiyum is gearing up for more drama with Chandrakala coming with an evil plan against Saraswathi.
Previously it was seen that a furious Madhu returned home and told her mother, Geetha about Saraswathi insulting her and her boyfriend for mocking Tamizh about not knowing English.

Madhu’s father scolded Madhu for insulting Tamizh while Geetha supported Madhu. Madhu vowed to take revenge from Saraswathi for her insults. Tamizh and Saraswathi were overjoyed to start their married life. They started getting romantic.

Saraswathi started to feel uneasy all of a sudden and fainted. Tamizh got worried. The latter called Ragini to checkup Saraswathi. Ragini said that Saraswathi might have food poison and asked to rush her to the hospital immediately. Kodhai and Natesan got happy thinking that Saraswathi was pregnant. They got disappointed when they learned it’s not the case.

In today’s episode it will be seen that Chandrakala will learn that Saraswathi’s health got deteriorated the previous day night and was hospitalized. She stayed in the hospital in the whole night.

What will happen next? How Tamizh and Saraswathi will tacke this situation?

Will Tamizh and Saraswathi find out Chandrekala is behind this commotion?