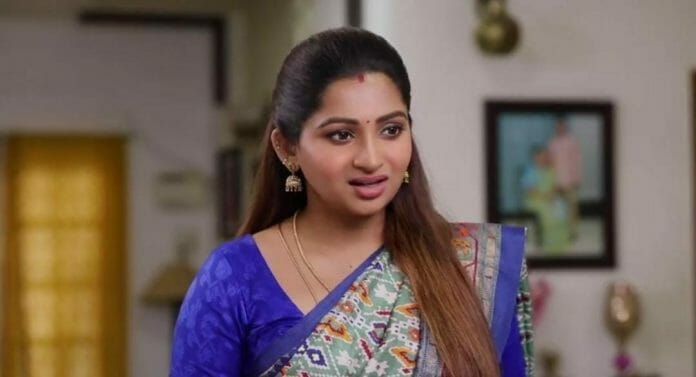 Previously, it was seen that Kodhai phoned Chandrakala and told that Vasundhara is pregnant. Chandrakala was overjoyed to hear this. Later She visited Kodhai along with Adhi. She congratulated Vasundhara and Kodhai.

Chandrakala wanted to organize a party to announce to her relatives about Vasundhara’s pregnancy. Tamizh and Saraswathi opposed this proposal. Kodhai also rejected Chandrakala’s idea which angered Chandrakala. Meanwhile Madhu’s parents returned home from the trip.

They were shocked to learn that Madhu resigned her job. They asked Madhu the reason for her action. But Madhu refused to answer and reacted angrily. Later Geetha visited Chandrakala and talked about Geeta’s marriage.

Chandrakala told her about Vasundhara’s pregnancy and Kodhai rejecting her proposal. Chandrakala got determined to organize the party in order to defeat Kodhai.

In today’s episode, it will be seen that Chandrakala comes to meet Kodhai with a new suggestion. As Kodhai and Natesan aren’t at he. Chandrakala tells her suggestion in front of the rest of the family. She wants to have a small get together only between their both families.

She invites Kodhai’s whole family to her house for the same. After Kodhai and Natesan return, Saraswathi tells them about Chandrakala’s idea and her invitation to her house. Kodhai refuses to attend the get together and asks Karthi-Vasundhara and Saraswathi-Tamizh to attend.

Vasundhara becomes upset and refuses to go. So Saraswathi convinces Kodhai to go. Vasundhara is elated when Saraswati tells her that Kodhai agreed to come to Chandrakala’s house.

What will happen next? What Chandrakala is up to?