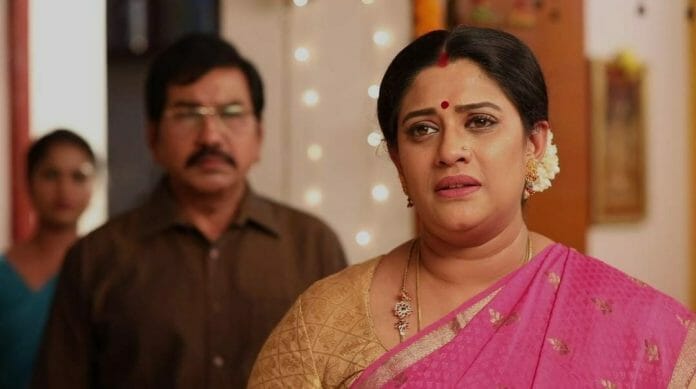 Vijay Television’s popular daily soap, Tamizhum Saraswathiyum, is gearing up for more drama with Adhi getting arrested and Arjun-Ragini getting married.

Previously, it was seen that Tamizh found Arjun’s location with the help of the police. He reached there along with the police team and stopped Arjun and Sneha’s marriage. Sneha confessed that Adhi was behind all this.

The latter admitted in front of the police of kidnapping Arjun to marry Ragini who had ditched him to save Chandrakala. The police arrested Adhi. Arjun marries Ragini. Adhi asked Chandrakala to ruin Kodhai family who had ruined his happiness.

In today’s episode, it will be seen that Ragini and Arjun complete the post wedding rituals and have been welcomed by Kodhai’s family. The aarti plate prepared to welcome Arjun and Ragini blows up. Kodhai’s family becones worried to see this. Arjun says that it’s due to the fan that is on.

Namatchi turns off the fan. Later, Kodhai apologizes to Arjun’s family for misunderstanding Arjun and his family. Arjun’s sister taunts Kodhai for easily believing the accusation on Arjun.

Vasundhara finds weird that Arjun’s sister who told to be less talkative due to shyness speaks lot after Arjun and Ragini’s wedding. She shares the same with Karthi, but he ignores it. The next day, Kodhai calls out Saraswathi and Vasundhara to reconcile them.

Namatchi asks if they fought again which confuses Natesan and Kodhai. They ask if they already once fought and for what.

Is Arjun really the one he pretends to be?