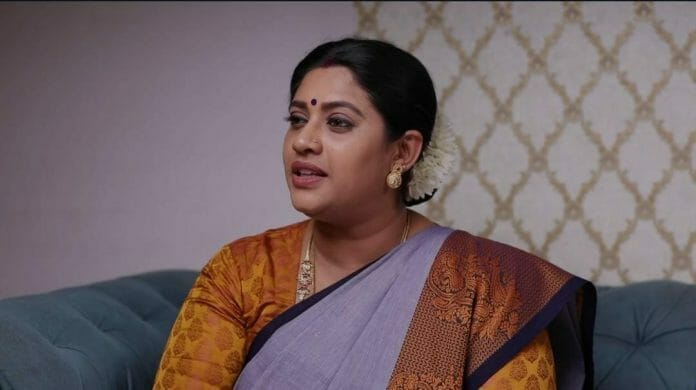 Previously, it was seen that  Arjun made a clever move. He phoned Ragini and told about Adhi helping Ragini’s family by giving three crores to solve the employees’ salary issues. He praised Adhi to Ragini. The latter was impressed by Arjun’s action.

She thought that Arjun was innocent and doesn’t have an ego, so he praises Adhi, who was a competitor to him in the love race. Ragini decided to confess her love for Arjun. She messaged Arjun asking him to meet her in the evening.

An overjoyed Arjun phones Adhi and told him that Ragini is going to propose to him. A shocked Adhi notified the same to Chandrakala. The latter misleaded Kodhai about Ragini and Adhi’s relationship and tried to fix Ragini and Adhi’s alliance.

In today’s episode, it will be seen that Kodhai promises to get Ragini married to Adhi despite Tamizh and Saraswathi asking Kodhai to know Ragini’s opinion. Ragini, who has just arrived, is shocked to hear Kodhai’s decision.

However Tamizh and Saraswathi urge Kodhai to ask Ragini her opening. To their shock, Ragini says that she agrees to her mom’s decision. Adhi meets Arjun and flaunted about his and Ragini’s wedding being fixed. Arjun is shocked to hear this.

What will happen next? What will Arjun do now?

Will Tamizh and Saraswathi find out that Ragini loves Arjun, not Adhi?